I still remember the first time I heard the term aperture and how it confused me. I had no idea what it meant and what its relevance was in terms of photography. so I did one thing that anyone in my place would have done, ask someone who you think may know the answer. I asked the only guy in my circle who owned a DSLR, a Nikon D60, which also happened to be my first DSLR. The way he explained Aperture to me is something that I can never forget. Here is how the conversation took place.

“Aperture is just like your eyelids” He replied in a single sentence which of course was barely enough to clear my confusion.
“How do you mean?” I asked.
“Imagine you are standing out on a bright sunny day, how would your eyes react?” He threw the question back at me.
“I don’t know, how?” I didn’t know what he was getting at.
“Your eyelids would close a bit, because its too bright”
“OK”
“And If you are standing in a dark place where the light is dim, you will open your eyelids wide so you can see better”
“OK”
“Thats how Aperture works” And thus he ended the explanation.
“What?” Is all I could manage to say.

Of course at that time no part of this short conversation made any sense to me. I was as confused after listening to this explanation as I was before. But after sometime and after speaking to a few people, I understood what my friend tried to explain. What he meant and what I heard from several other people as well was that Aperture is a setting in your camera that you adjust as per the light conditions. For example, If you are shooting on a bright sunny day, you reduce the aperture because there is ample light all around whereas If you are shooting in low light conditions, you increase the aperture.

While the light part in the above statement is correct, there cant be a more incorrect and confusing definition of Aperture than this because the concept of depth of field is left out from it.

To understand Aperture better, and to understand how the above definition was derived, lets first know what Aperture actually means.

“Literally, the word Aperture means nothing but “a hole” and it holds the same meaning in photography terms as well. It is a device that is formed by a series of 5 to 15 overlapping blades [See picture below] and controls the admittance of light through your camera lens to its sensor.” 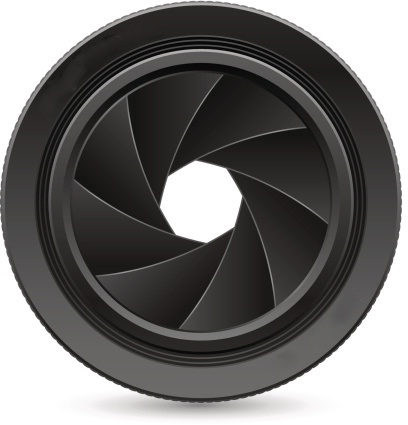 See that hole in the lens in the picture above? That is it, that is Aperture.

Also known as Diaphragm, Aperture is the unit of measurement for the size of the opening of Diaphragm which affects the light that passes through it. As you press buttons or rotate a dial on your camera [depending on your camera], the overlapping blades move and size of this hole either increases or decreases which directly affects the amount of light that will pass through the lens to the sensor when you take the shot. That my friends is Aperture, a hole in the lens through which you take the photos. The eye of your camera that you adjust accordingly to decide if you want the eye wide open or shut a bit.

Now that we know what Aperture means, lets understand how Aperture is measured and adjusted before we go into how it affects your photographs.