When it Just Happens to be a Bad Day

Sometimes a day just turns bad and things continue to prove to be annoying one after another; no matter how hard you try to avoid. Same thing happened with me yesterday. So irritating the day and events turned that I was almost on the verge of screaming at the top of my voice. Thankfully I did not do so; and was just glad that the day got over in the end. I had met an accident on last Friday and my Thar took some damage on its bumper, bonnet and fender. I was anyways a bit upset about the whole thing and the day yesterday just made the things worse for me. Right from the morning till evening, it just proved to be a bad day and nothing else. 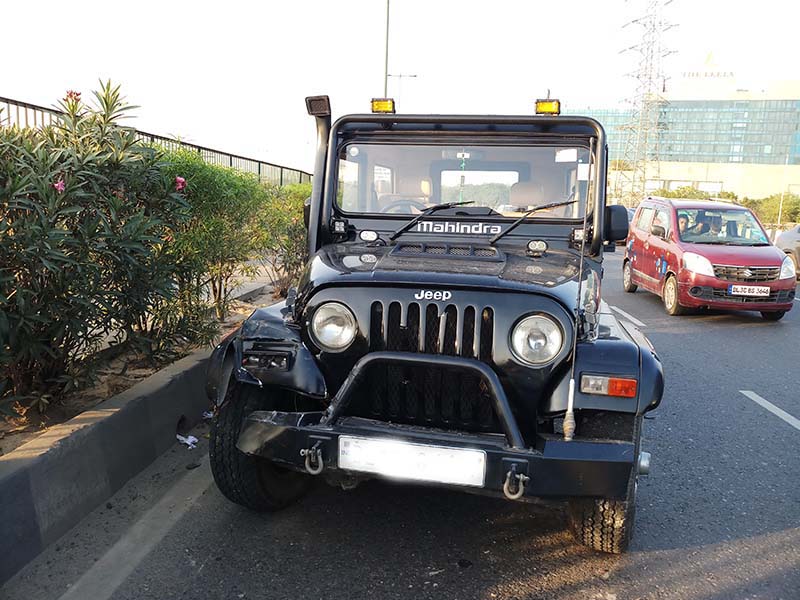 It all started at 9 AM when I called the service center of Koncept Mahindra; asking for the address that I was supposed to visit them at. They had taken my Thar on Sunday after the accident last week for repair work. The car was picked up from my home by their driver but I was told that I would have to come at least once with my insurance documents. I knew their service center was in Okhla which was at quite a distance from my home in west Delhi.

However when I called their service center guy that morning, I was told that the service center was in Okhla; but the Body repair shop was in Badarpur; and that is where I would have to come with a copy of my insurance policy.  It meant an even longer drive to the other corner of Delhi; but I did not really have a choice. It was a Monday morning so traffic was anyways going to be huge. I asked the guy if he could send me the location of their body shop that I could just follow. He agreed and messaged me the same on watsapp.

I waited until 11 AM before starting from my home; just to ensure that I did not get stuck somewhere in the morning traffic but it really did not help much. Following the location on Google maps, it still took me nearly 2 hours to finally get to Badarpur and this is where it got interesting. After I reached Badarpur, at one point, Google Maps asked me to take a left into what looked like a slum type residential area.

This just did not seem right. First thing was that there was no may my Honda Amaze was going to fit into the narrow streets of that slum. Second, a Mahindra service center could not be in there. In doubt, I picked up my phone and called the service center guy again but he just did not answer. I waited there and called him at least 5 to 6 times but he wouldn’t answer his phone. Not knowing what to do, I took an entire circle around that residential area thinking that maybe there is something on the other side. But I did not find a service center anywhere and Google kept asking me to get in.

I finally found a spot to park my car, stepped out and started to walk the narrow streets to the location. It nearly took me 15 to 20 minutes to finally get to that location and just as I feared; it was a house and not a Mahindra Body shop. I again called the service center guy and luckily this time he answered. After a 10 minute long conversation of explaining him where I was; it turned out that I had arrived at his house. When I called in the morning and asked him to send me the location of the service center; he instead sent me the location of his residence.

There was no point in yelling at him really. It was nearly 1.30 PM of a hot day in the month of May. Keeping my calm, I asked him to message me the address of the service center which he immediately did. Now a bigger task was to find a way out of the slum. Coming in, I was following Google Maps but for my way out; I had to ask other people for directions. As a result of it, the point where I entered the residential area from was completely different than the one where I came out. And yes, this meant that now I did not know where have I parked my car.

It just kept getting better. For the next 15-20 minutes, I kept walking around but could not locate my car. I did not even remember a landmark so could not even ask anybody. Just when all hope seemed lost, it was little kids that came to rescue. I noticed a few school girls walking home and it immediately rang a bell. There was a school where I had parked my car. I just started to follow where the girls were coming from and sure enough; I reached their school and my car was parked right in front of it.

By then it was already 2.30 PM. I was hot, sweating and completely annoyed walking around in the sun. Finally after another half an hour of driving; I arrived at the service center and it still turned out to be in a very unexpected kind of place. It was in fact really located in a slum type area. Right outside its gates were the camps of what looked like the beggars that you come across at every signal in Delhi. Ignoring the place, I parked my car in a corner and went in.

Another surprised awaited me here. After looking at my insurance policy, I was told that it was not zero dep. This meant that I will have to make a partial payment of all the repair cost. This policy was handed over to me when I bought my Mahindra Thar. I never bothered to check what type of policy it was and kept renewing it each year. I asked him how much will I have to pay and he gave me an estimate of around Rs. 12,000 at least.

I signed all the documents and came out of the service center but the day was still far from over. As I was approaching the spot where I had left my car, I heard a woman’s voice shouting at me to stop where I was; and not come any closer. I froze at the spot not knowing what it was or where the voice came from. When I stopped, the voice spoke to me again and asked me to wait and give her some time. I followed my gaze to where the voice was coming from; and noticed a woman squatting behind my car; taking a dump at 3 PM.

She looked like one of the beggars that were living outside the service center. So yes, now there I was, standing in the sun at 3 PM waiting for someone to take a dump behind my car so I could go home. And she too took her own sweet time; made me wait for nearly 15 minutes.

When I finally arrived home, it was almost 6 PM. 7 hours gone just for the task of going to a service center, sign a paper and come back home. I was lost, had to walk in the sun, almost lost my car, was told that I am out Rs. 12,000 and then finally had to wait on someone to shit behind my car. If this is not a bad day, what is?

2 Years of No Smoking

One Year of No Cigarettes – Feels Good