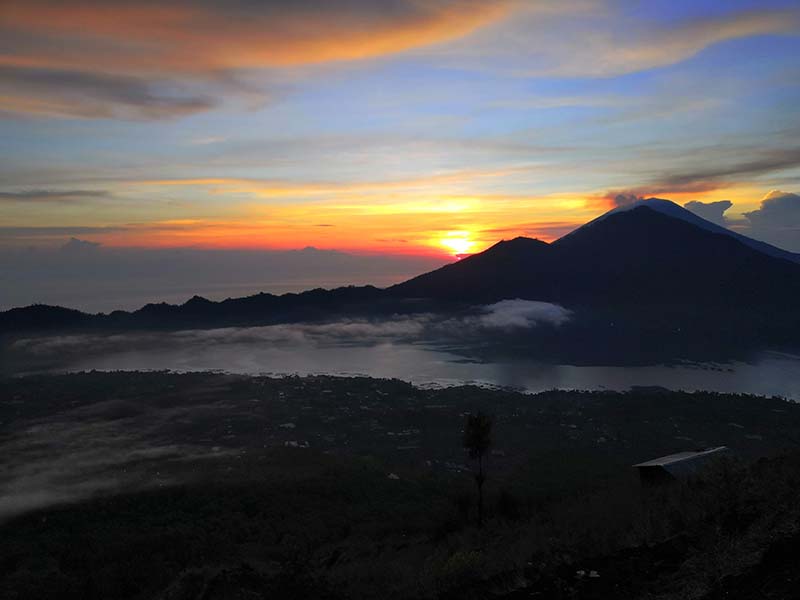 The Indonesian island of Bali is one of the most accessible and popular holiday spots for travelers. Its reputation as a party and leisure destination aside, it also serves an exciting platter of adventurous options for intrepid travelers. Perhaps the most popular of these options is the Mount Batur sunrise trek.

It is best done early morning during sunrise as it presents an amazing photo opportunity of stunning panoramic views. Here I write about my experience of walking this mountain trail for a quick micro-adventure.

I was picked up from my hostel in Ubud at 2 am along with 5 other travelers and we drove for about an hour before reaching the starting point. We also stopped for about 15 minutes on the way, at a place where the operator had arranged breakfast for us.

They also provided plastic water bottles which I refused as I was carrying my own reusable one.

After breakfast we drove for about 15-20 minutes past Lake Batur which was of course not visible then. On the way, we crossed checkpoints manned by gatekeepers draped in shawls and sweaters and not very eagerly waiting in the cold to collect the entry fees.

We were then, appointed a guide, a young lad from a nearby village on the other side of the mountain. We shook hands, stretched our bodies, and prepared ourselves. I took my headlights out while the guide quickly did a headcount. Half-past three in the watch and we started off as a team for a walk in the dark.

The Batur trek is a popular one especially in the dry season from April to October. Even in December, quite a lot of people had turned up early that day to witness something beautiful just like us. It was a flat stretch at the beginning that perfectly warmed us up for what was coming ahead.

Soon we were not feeling cold anymore. We passed the farmlands on both sides of the flat path where local farmers were growing various kinds of vegetables. In about 10 minutes we reached the end of that flat trail and started climbing up gradually.

As I looked up, I could see many small illuminated dots in the dark each representing a torch or a headlight. They were slowly moving up in a serpentine manner. We kept our heads down and followed the guide lest we lose him in the crowd.

Yes, a crowd. There were many people trekking alongside. As a group we made sure to keep together and were constantly checking for each other.

The trail was mostly narrow, climbing gradually in a few places and steep at others. We had to be careful of our steps because of the loose rocks on the way, especially in the dark. When so many people are walking with you on the same route that goes all the way to the top, it’s impossible to get lost.

Our particular group was composed of a relatively fit bunch of people and so we scurried past the numerous other groups on the way. The guide liked the fact that we were making his job quite easy. When we paused for a water break, he seemed happy that we covered quite a length in a quick time.

Catching our breath, we looked back. The starting point was clearly visible far down there. As I took a few sips out of my bottle I glanced at the dark panorama of the vast farmland area surrounding the mountain. It was lit up in patches with occasional flickering lights here and there.

Below, the tiny dots of light continued moving, adding up to the seemingly never-ending zigzag queue of excited hikers. According to the guide, we were very close. Pleasantly surprised, we started moving again and in about 30 more minutes of gradual climbing, we reached a viewpoint.

The guide found a place for us to sit and congratulated us. The sight was really nice and the outlines of the nearby mountains were clearly apparent now. Sitting down I saw people still continuing to walk further. Also, I was a little confused because the web photos I had seen and the time it took for us to reach didn’t quite seem to add up.

On inquiring, the guide told us this is a good viewpoint where most people stop but it is not the summit which is still 30 minutes away. After we all agreed we were not settling for this pseudo top, we picked ourselves up and carried on.

We continued further along a sandy trail. It was the steepest section so far and quite slippery at various points. Carefully with a firm footing, we kept moving up. The higher we went the better the view was getting. The colors of the sky were changing by the minute and we literally couldn’t stop ourselves from having an amazing view up at the top.

After a few more steep sandy sections, we finally arrived at the hut just above which was the main summit. It had taken us about 1.5 hours from the parking spot. With a few long strides, I quickly reached a good vantage point and gasping for breath, I looked around. 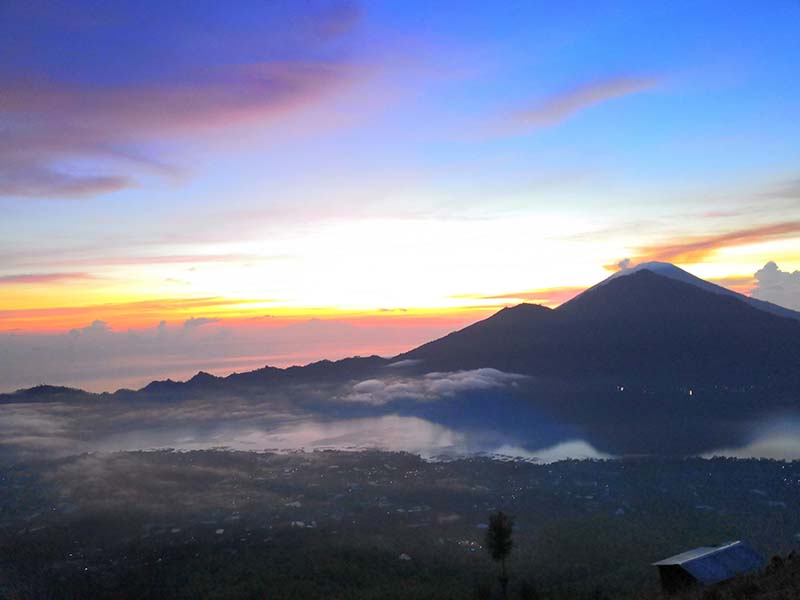 What was that view! The magnificent distant silhouettes of Mount Agung and Abang on the other side of Lake Batur; the reddish-orange layers of the sky behind the mountains mixing perfectly with the clear blue above; the white blanket of dense clouds covering the lake and the dark green forest cover all around; it was indeed a spectacular sight.

We were lucky as the obscure clouded horizon behind the mountains also hesitantly revealed the peaks of Mount Rinjani of nearby Lombok Island. Everybody at the top was standing on a narrow ridge admiring the breathtaking panoramic view. Just behind us was a massively deep crater of the Batur Volcano. Glancing down we could see a thin line of steam coming out from an invisible hole below. It was indeed an amazing place to be. 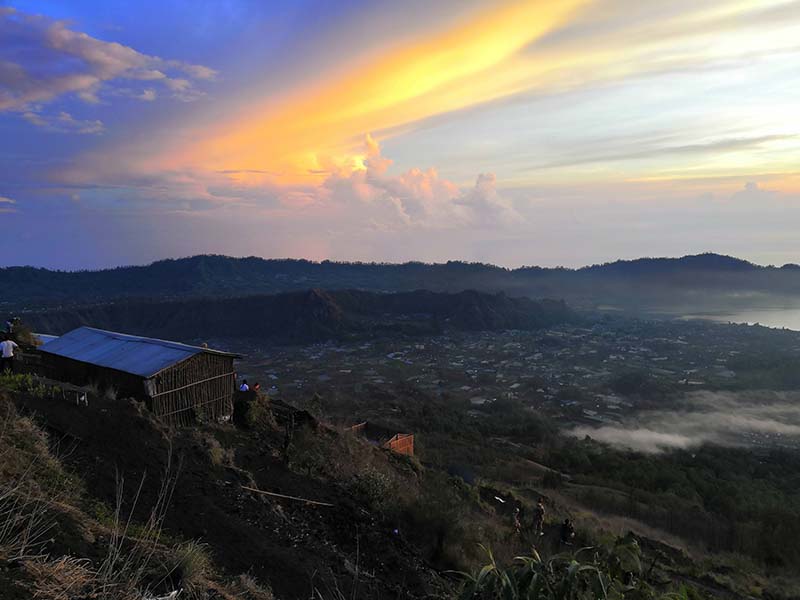 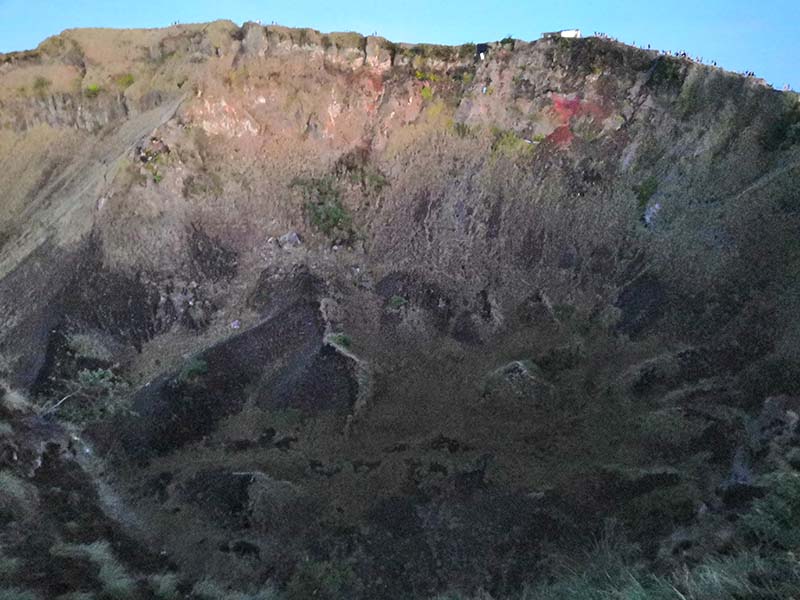 Feeling good about our early morning achievement, everybody in our group got scattered, busy with their respective cameras and poses. As we waited there for the sunrise, everyone tried to capture as many memories as they could.

The group got back together again when our guide served us two slices of bread and an egg for breakfast at the summit. The eggs were supposedly cooked with the help of a volcanic steam vent. We sat down together, peeling the hard-boiled eggs, and admiring the view of the vast and expansive caldera below.

At this point, the sky seemed like it was preparing for something very beautiful; as if it had saved the best for the last and the ultimate time to reveal had just arrived. The colors of the sky were rapidly changing and just before the sun was about to pop out behind the mountains, the deep orange hues of the sky were a sight to behold. Photography enthusiasts were having the time of their life and rightfully so for it was really a magical view. 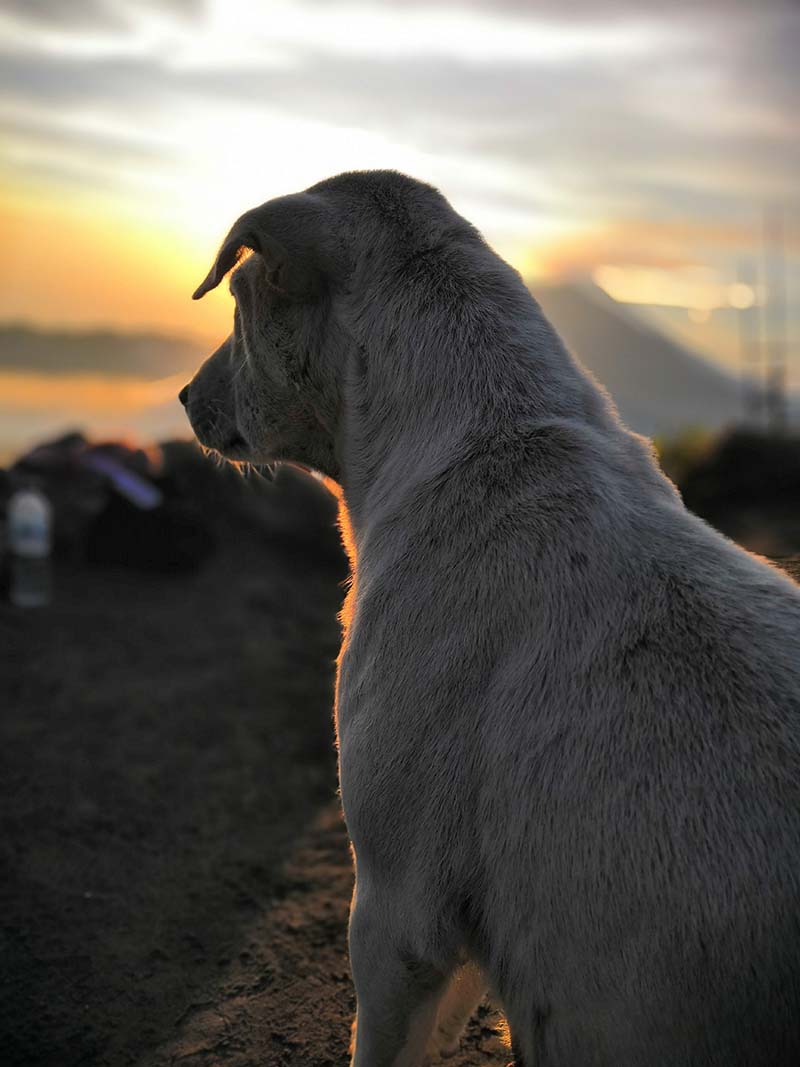 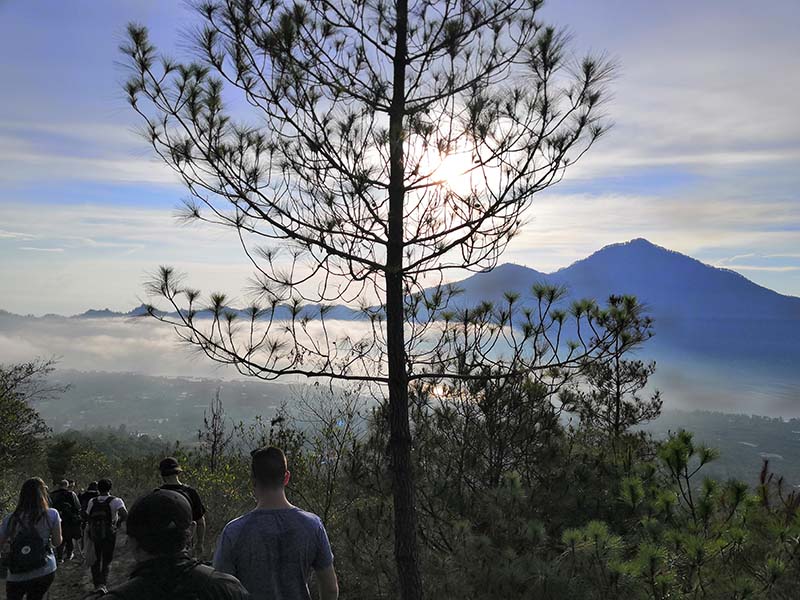 After about an hour and a half, we decided to descend and go back. We took a different trail while going down. It was narrow in the beginning and so we took some time navigating the sandy slippery parts. The group pace increased as soon as the trail opened up.

On the way we came across expansive farmlands with neatly laid down rows of crops and veggies. They looked beautiful in the early morning light with the mountain in the background. With our brisk pace, it took us an hour to walk down from the summit to reach the start point.

Our car was waiting for us. It was now time to leave. After tipping, we bid farewell to our guide and hopped on inside, ready to say goodbye. On the way, we scrolled through our galleries for it had definitely gotten much richer with loads of stunning shots and wonderful memories. 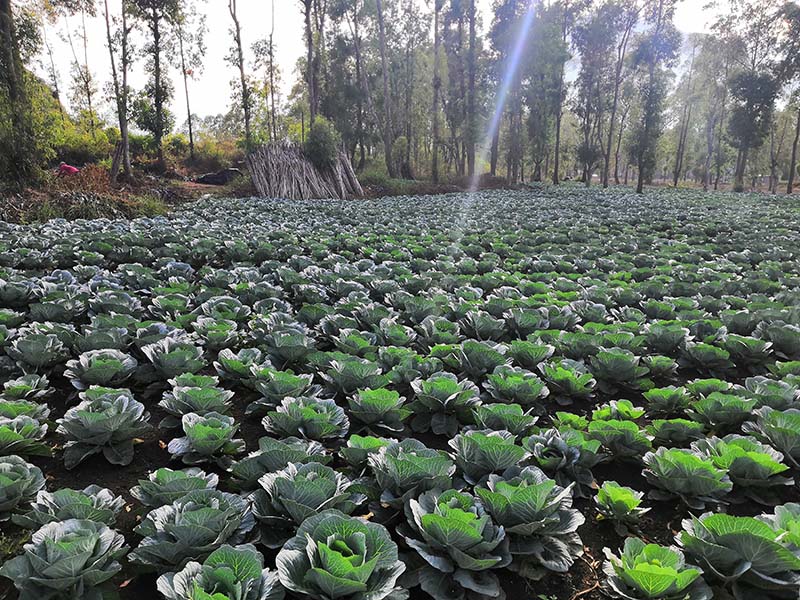 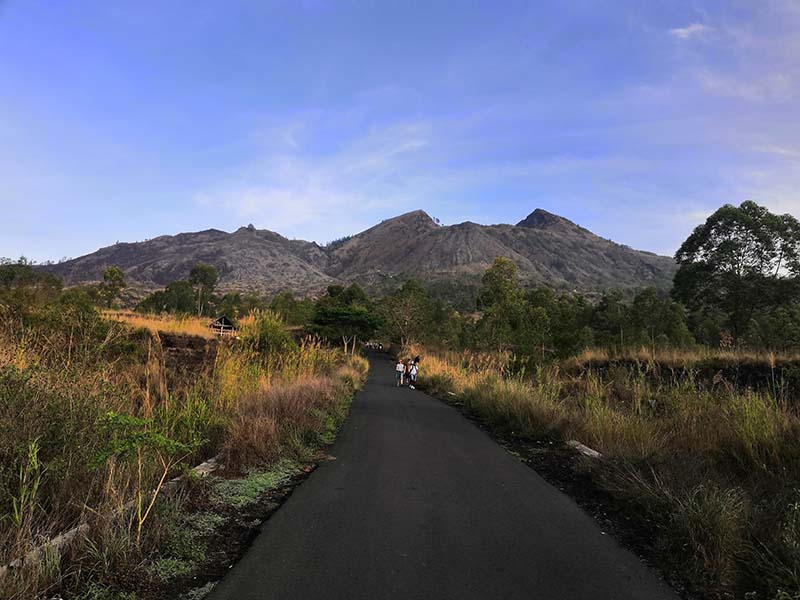 The Mount Batur hike is a must-do day trek when you’re in Bali. Among all the hikes there though, this one will provide you the most bang for your buck. It is a short two-hour hike which is physically not too challenging. It is generally considered an easy trek.

Now easy here is a relative term but if one has an average level of fitness, they should be able to complete it without much difficulty. Lots of loose rocks on the ground can make it difficult for beginners especially in the dark. It is, after all, a mountain trail and definitely not a walk in the park. So even if one is an experienced hiker, it’s always good to exercise caution especially when walking in the dark.

It was the month of December, which is typically the rainy season for Bali. Fortunately when I visited it hadn’t been raining and the weather had mostly been favorable. I had only one day left in Bali as I was on my way to Surabaya in Java the day after.

So I had to make the most of it. I had two options the night before. I could either hike the Mount Batur volcano on my own; or I could book an organized tour and let them handle all registration, transport arrangements, and other details. I chose to go with a tour guide because of a lack of time. Also, I had read about the local Batur area association that had made it mandatory to hire guides because of the safety of trekkers and local employment reasons.

In fact there have been incidents where independent trekkers got into trouble with locals for not enlisting their services. I, therefore, chose to avoid any long discussions and hassles later which might hamper my trek experience. So without taking any chances, I booked with a good local tour operator after quick research. Below are the details:

Mount Batur: The Volcano Mountain and the Lake

Mount Batur is an active stratovolcano located 2 hours’ drive from Denpasar airport in the Kintamani sub-district of Bangli Regency‎ in North East Bali. It’s also known as Gunung Batur and is listed as a Ribu. Gunung is the Malay/Indonesian word for mountain, and regularly associated with volcanoes throughout Southeast Asia. Ribu is the Indonesian word for a thousand, indicating a prominent mountain summit with at least 1,000-meter elevation drop all around.

During the past centuries, the mountain has seen small eruptions every few years and its last eruption was recorded in 2000. The peak of Mount Batur sits at 1717 meters (5,633 ft.) above sea level.  Lake Batur or Danau Batur, the biggest lake in Bali is located on the southeastern side. It lies in the caldera of the active Batur Volcano.

The popular fishing spot which is 16 kilometers wide is considered sacred by the Balinese people. In 2012, UNESCO declared the area of Mount Batur as a Batur Global Geopark for its cultural significance and natural scenery.

I hope the travelogue and information above on Mount Batur Sunrise Trek was of help. If you have any questions, or need any other details, please feel free to ask in the comments section below, or at our Community Forum, and I will be glad to answer.

Hi, I am a freelance trip leader who loves to craft memorable and extraordinary experiences for travel lovers. I have previously worked as a Trek Leader in the Himalayas and as an Outdoor Educator in Hong Kong & Australia. You can find me on Instagram: @abhirup_traveller

How to Plan a Trip to Switzerland from...