Leh to Stok Village to Chang Ma – The Adventure Begins

This post is in continuation with a previous one, and a part of my Stok Kangri Travelogue. In the previous two posts, I talked in detail about the preparation I made for the Stok Kangri Trek, both before I left home and after arriving in Leh City. The article below talks about our journey from Leh to Stok Village.

The most awaited day arrived when a pack of adventurers was to take the first step towards the biggest celebration of their lives. For me, it was the start of a transformation that’d stay with my whole life through. The morning was filled with enthusiasm & the will to conquer our fears. I was pumped & ready to go. Our first destination of the trip was Stok Village.

Sandeep called out for us after the light breakfast while we packed our stuff & got ready to leave for the journey. As we stepped out of the guest house, a mini truck was waiting for us to hop on. It would take us to the Stok village, where the trek started. The rest of the trekking staff was waiting for us at the starting point in Stok village, making necessary arrangements to ensure safety & comfort during the trek.

We boarded the rusty vehicle & made our way to the starting line. The road towards the Stok village is like a scene out of an old-fashioned war movie with barren lands running in parallel while the snow-capped peaks stare you from distance. I had dibs on the front seat next to the driver & that allowed me to click some clear photographs en route the destination. 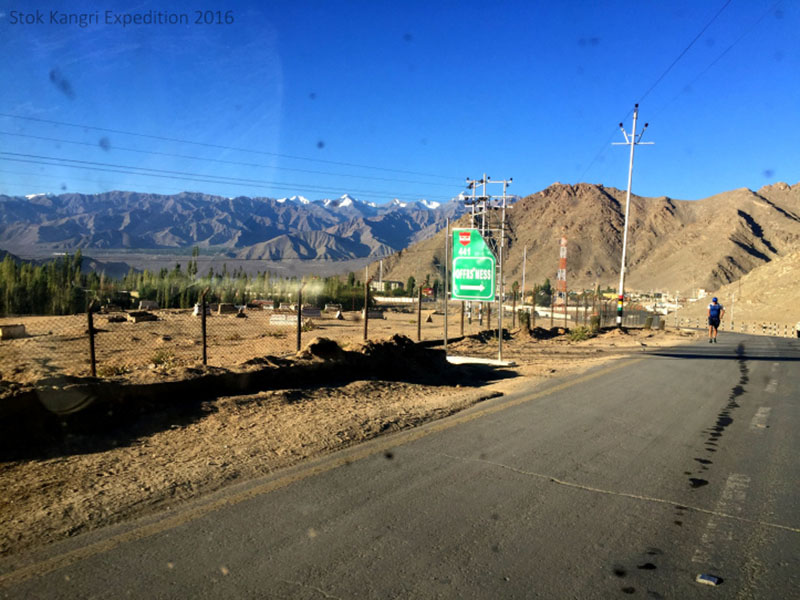 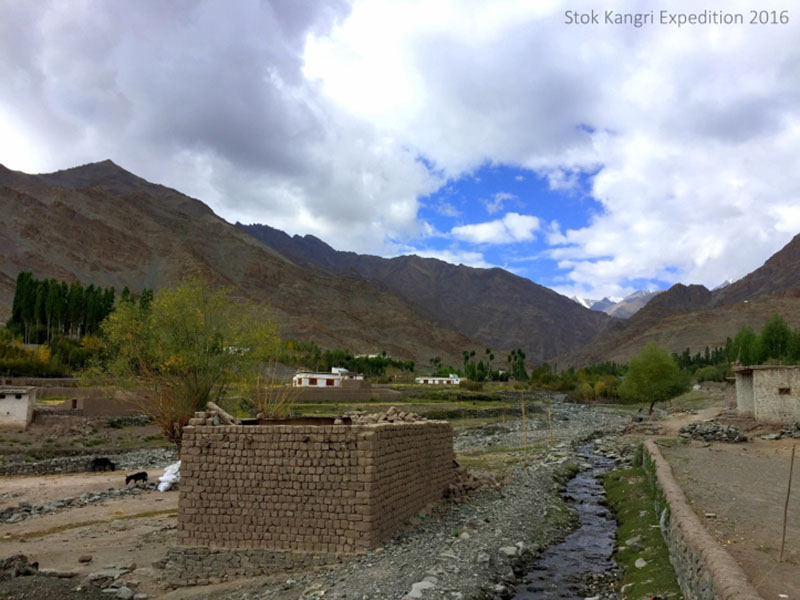 Stok village (11,550 ft) is roughly 17 km out of the city of Leh & we were there in a little over half an hour. We met the cook, the helpers, the hoarders & the assistant trek leader at the rendezvous point. After a precise briefing from the trek leaders & a group photograph, we set off for the trek we’d desperately waited for. 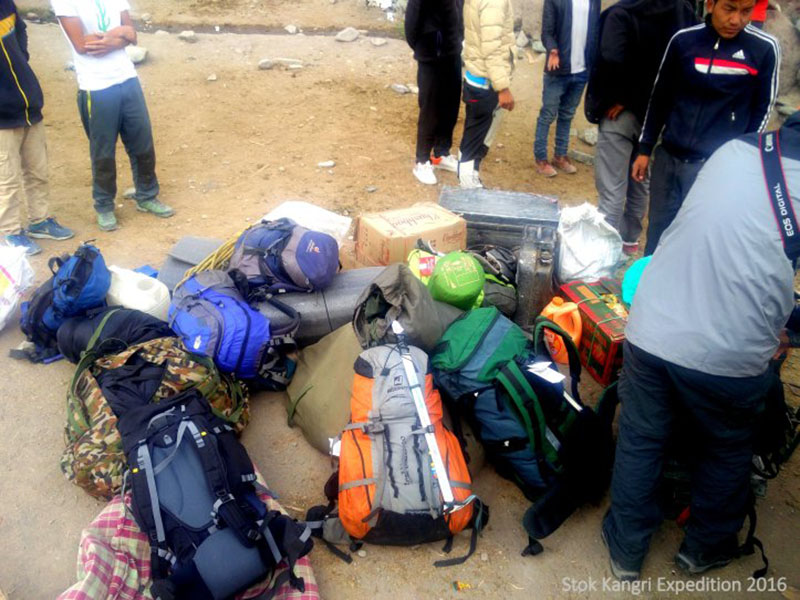 Stok is just a small village, one of many in Ladakh. The place is significant for four things. The first one is its stunning natural beauty and the views it offers which I believe is a common factor everywhere in Ladakh, irrespective of where you go.

The second attraction of Stok is its ancient monastery, known as Stok Monastery. This monastery is believed to be from the 14th century and is best known for a 22 meters high statue of seated Buddha. The construction of the statue was completed in 2015

The third one is the ancient Stok Palace which has now been turned into a Heritage Hotel. It is also the current residence of the former royal family of Ladakh.

But what really puts Stok on the map is that it is the starting point of the Stok Kangri Trek. The motorable road will bring you all the way to the village and this is where you will start hiking.

The trek in the mildly green farmlands of Stok village goes primarily through a series of ups-n-downs with occasional river stream crossings. It was pretty light for the first hour to walk on the gravel-ridden pathways that negotiated around the rocky patches that lay around us. The cliffs encompassing the narrow path to Chang Ma (our destination for the day), were eroded through successions of washouts & were astonishingly attractive to look at. 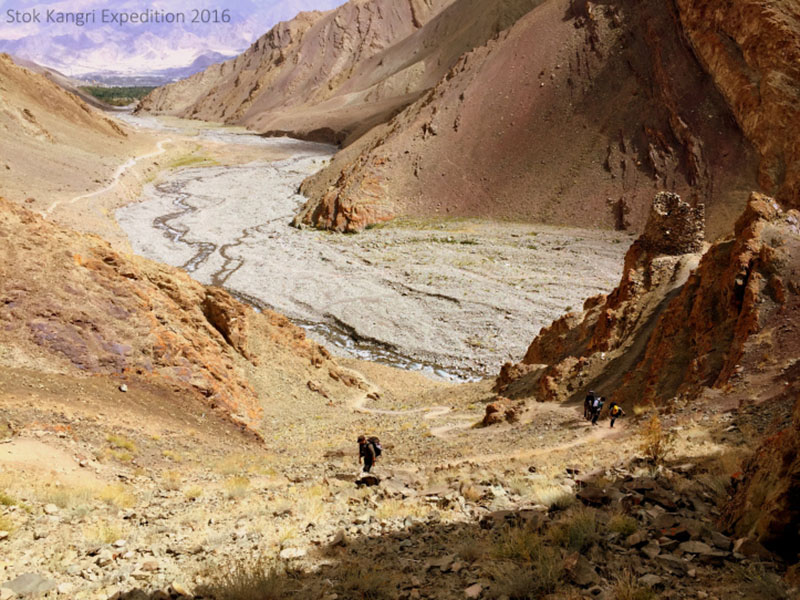 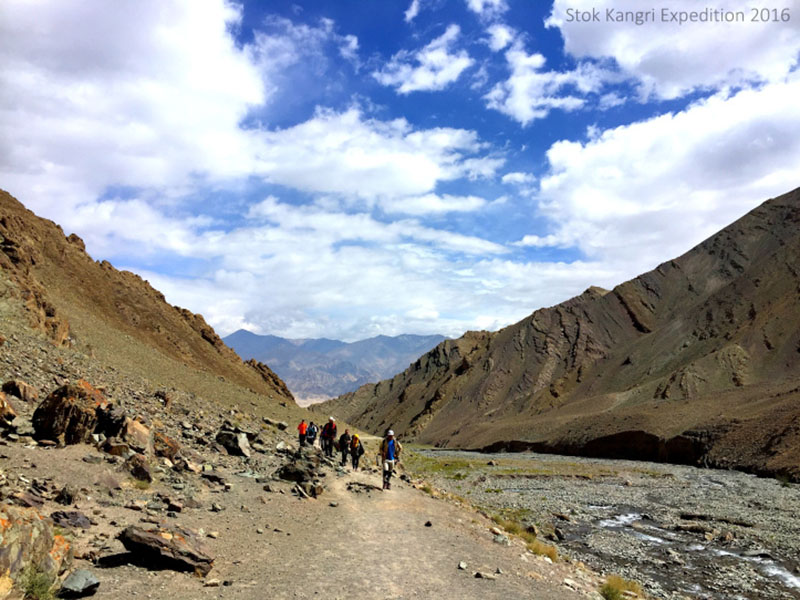 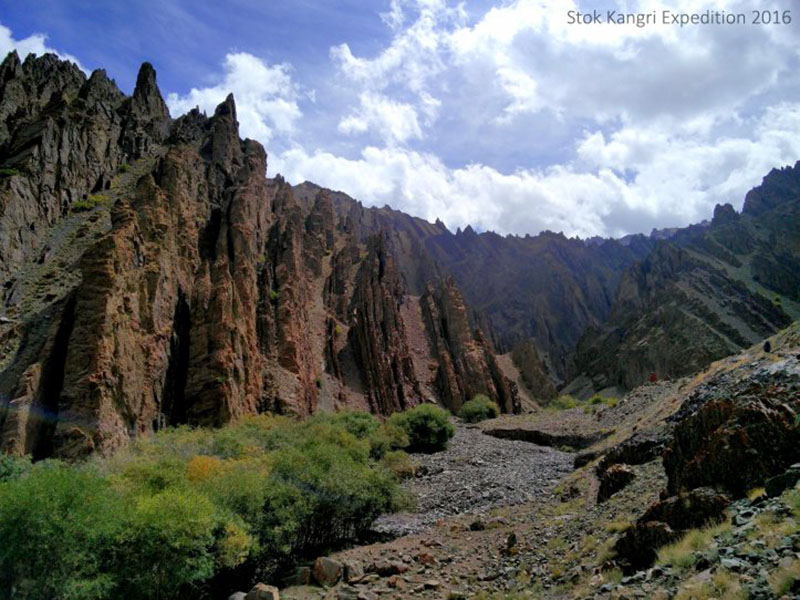 Soon after the flatlands, the scenery opened up & our paths climbed up the hills, all driven to take a toll on our energy levels. It was noon already & the sun was on its prime.

The group made its way through the muddy yet steep tracks to reach the top of the cliff from where we got the first view of the Leh city, far in the distant space. We decided to take a halt while everyone caught up to the point & eased out.

At that point, I realized we were away from civilization into the depths of nature. It is then when I realized I had to let go & now everything ahead of me, was to be dealt in person. I felt a calming relief in the lap of nature, sitting atop the cliff, riding us into the cracks of the rocky terrain ahead of us.

I felt delighted & had a faint smile on my face. While sweat rolled down my face, I cherished the efforts I had put in being there. It was a long road ahead, but I was unpretentious. I was already home.

We got down from the cliff on our way to the pebble-ridden patch of the trek that leads to the Chang Ma campsite. Each one of us captured the aura in our lenses & some got captured too. 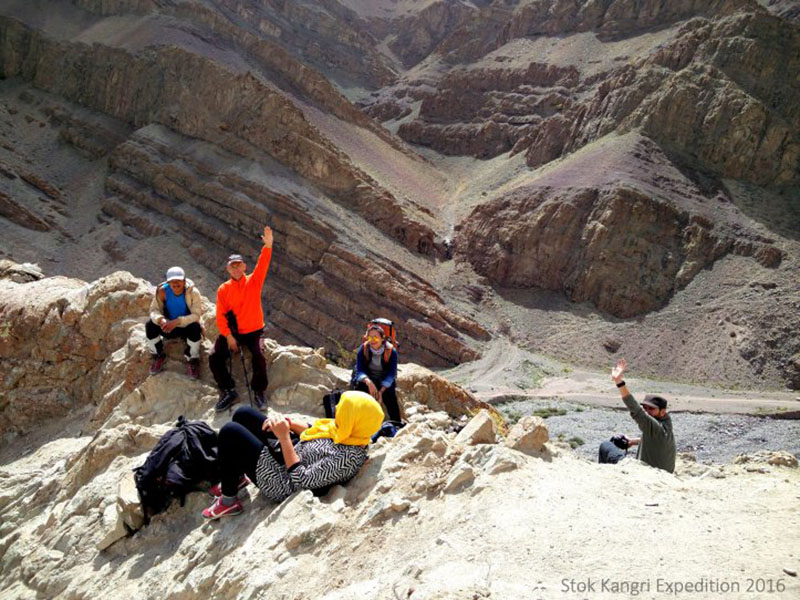 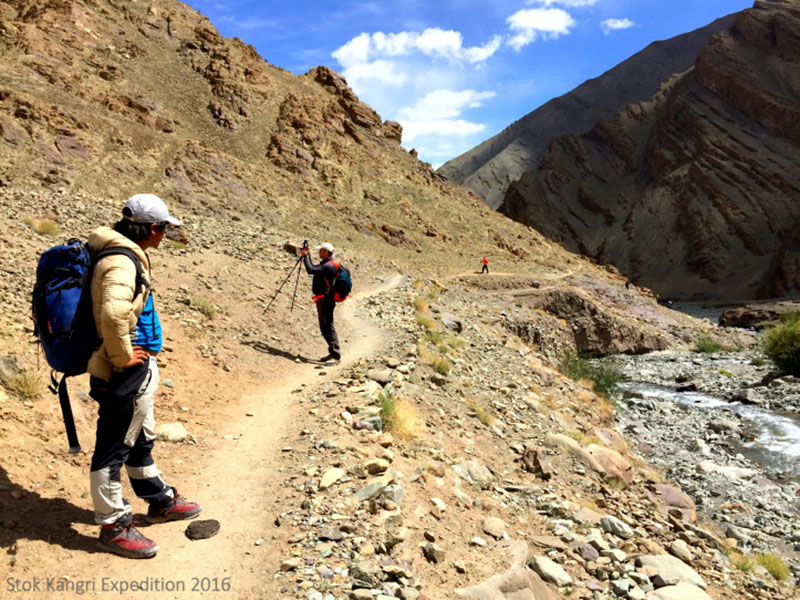 Seeping through the wild bushes & the rocky soils, we saw the Chang Ma campsite in the distance. It was 03:30 pm when I along with Sandeep & a couple of other trekkers made it to the campsite. Soon after, others joined & celebrations began. We were happy to reach our first milestone & congratulated one another. 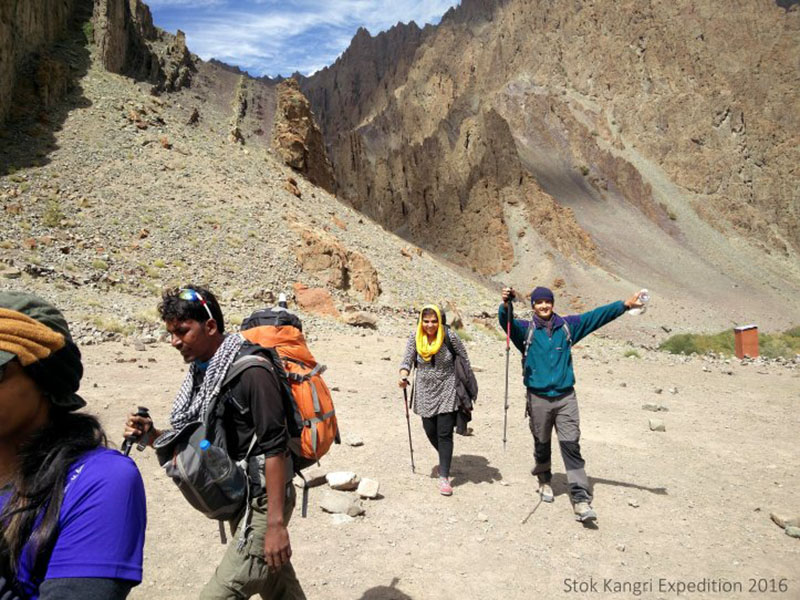 Chang Ma (12,950 ft) is a secluded campsite, situated 5.5 km from the Stok village. It is a flat place ideal for camping and is beautiful purple mountains. It also serves as a camping ground for people who just want to go on a short trek and not in fact reach Stok Kangri.

The level of ascent during the walk was moderate & we’d gain a little over 1000 feet in altitude. It’s noteworthy that in the Himalayas, an altitude gain comes with its own repercussions. One must comply with safety procedures, take good care of themselves & inform fellow trekkers if they feel uneasy or nauseous. I, on the other hand, went a little hasty & drank half a bottle of water upon reaching the Chang Ma campsite.

Now drinking water is advised to maintain body water balance. However, you’ve got to give your body time to adjust to the thin air when you gain altitude. As a result, I felt upset & after a couple of uneasy minutes spent roaming around the campsite, vomited rigorously.

It’s pretty common at such heights, but I had to learn the hard way. Sandeep suggested me to mix some Electoral (containing rehydration salts) with water to avoid dehydration & bring balance. Moments passed & I felt better. And that’s when I could mix up with the group & experience the joy.

The Chang Ma campsite is located right at the bottom of some pretty high cliffs with a river stream towards the back & wide-open barren land in the perspective. We climbed one of the steep patches for acclimatization in the evening.

If my wristwatch’s altimeter served me right, we were at 14,300 ft when we reached a rendezvous point on the cliff. From here, where everything we left behind looked tiny. The view was breath-taking from there & it felt proud to have come across this high with no technical help.

The steep climb was mostly through the loose gravel resting on the slopes, waiting to slide down any moment. I along with a couple of other trekkers reached last, while others accompanied by Sandeep made it well in time.

But since it’s not a race, I took my humble time to familiarize myself with the challenges of an unassisted climb.

Once there, we talked about our journey so far & previous treks in the Himalayas. Teo & David (both from Romania) shared their experiences from their native expeditions. It was dusky & light fell pretty quickly.

Sandeep instructed us to get down from the cliff & safely trek down the slopes. On the way, he showed me how to make use of the grooves under the trekking shoes to avoid slipping on almost any surface. It was thoroughly helpful, I slipped only twice! 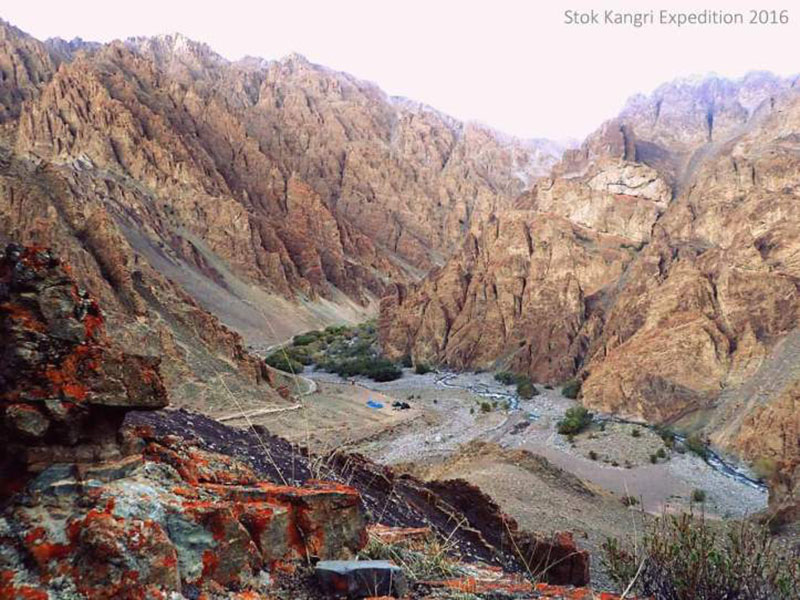 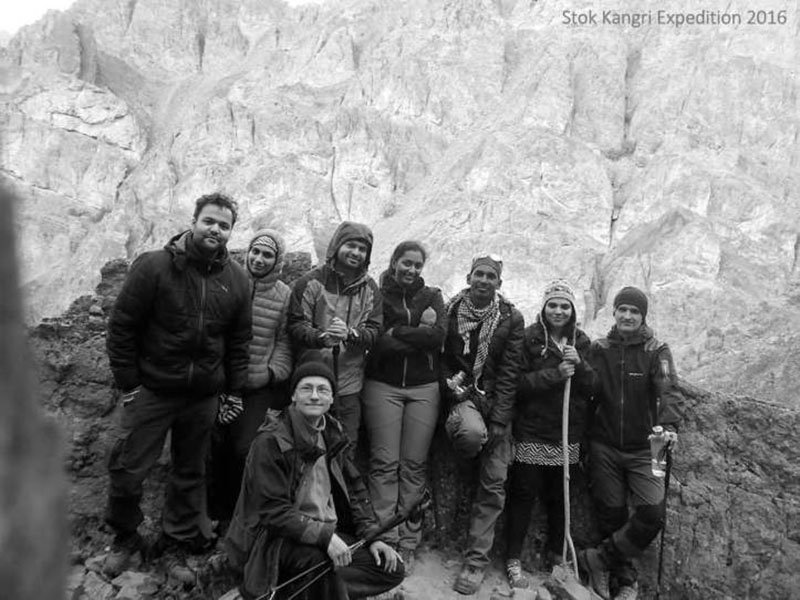 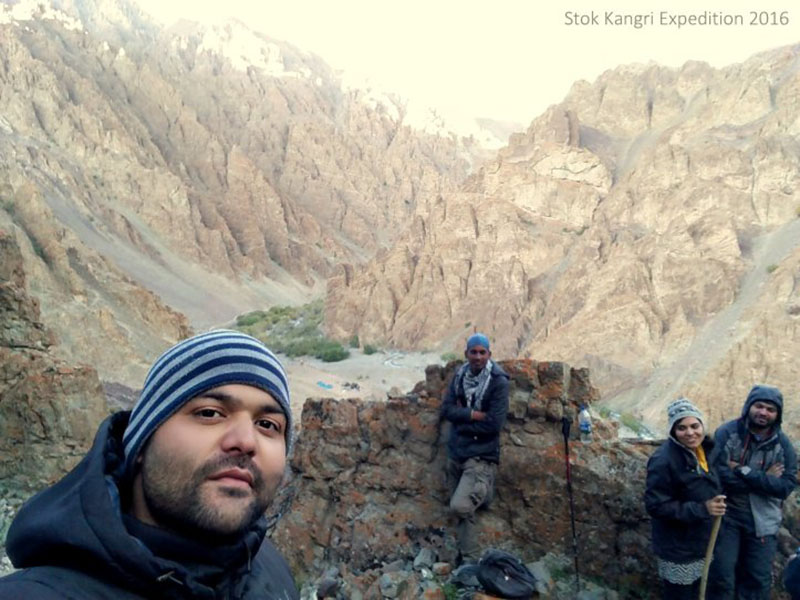 The Camp, Bonfire, and Friends

We got down to the campsite, took some easy breaths & pitched our tents. I learned how to pitch a tent on a rocky surface. Sandeep knows his game well. So he stepped aside & he let us pitch our own tents. Some of us collected wood for lighting the campfire while others tried reception on their cellphones.

Surprisingly, my Airtel postpaid still caught reception & I made that one awaited phone call back home. We enjoyed the lovely dinner prepared by our staff & danced to some awesome Punjabi music. Being the only one from the Punjabi community in the group, I didn’t shy away from throwing some flamboyant moves & taught my Romanian friends a couple of ‘em too. 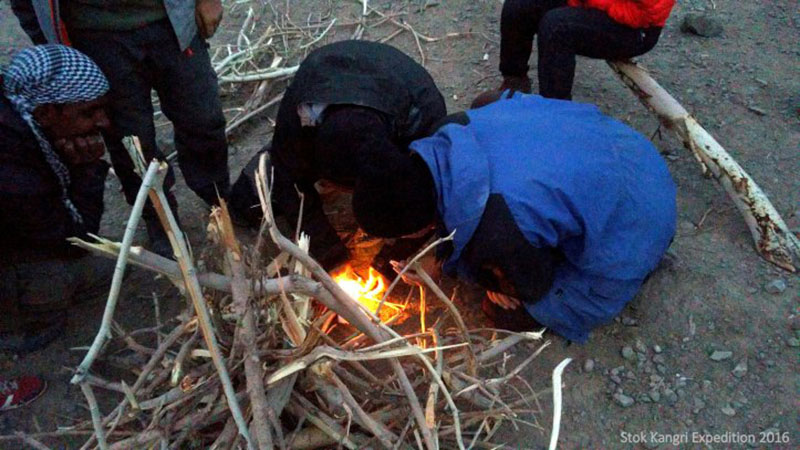 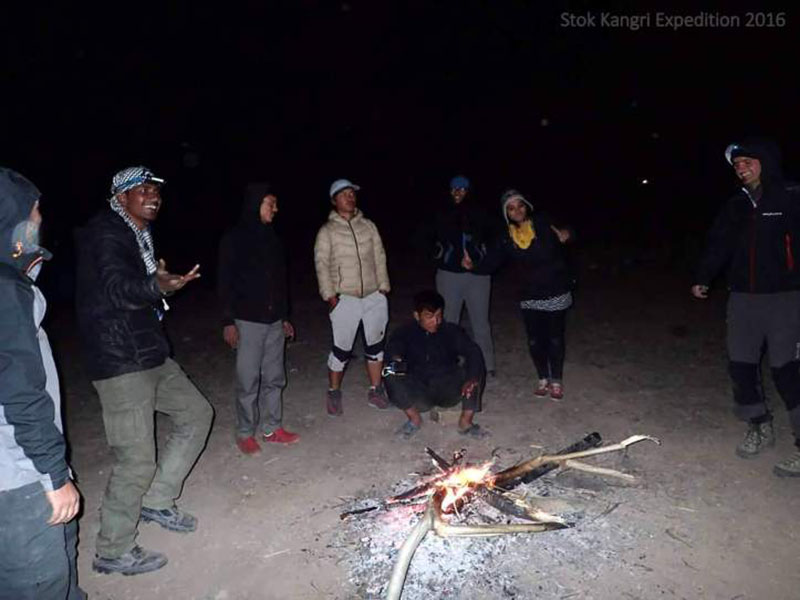 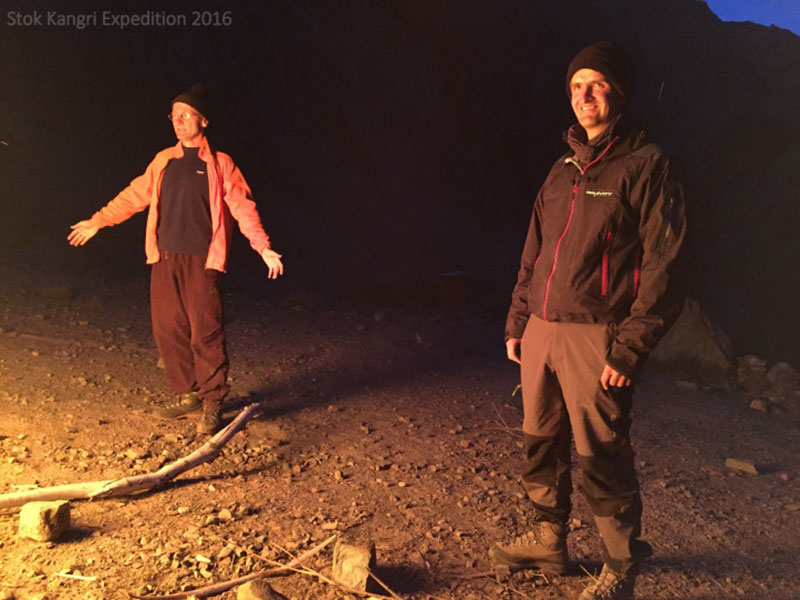 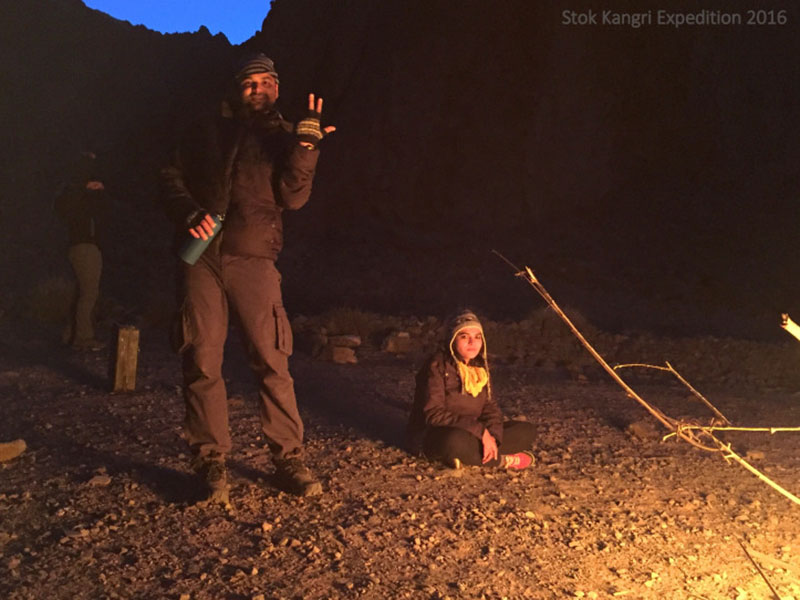 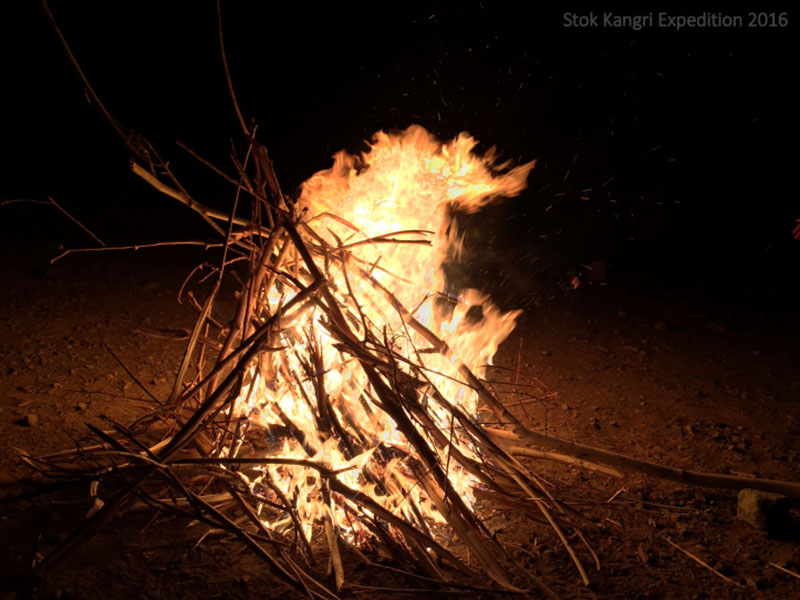 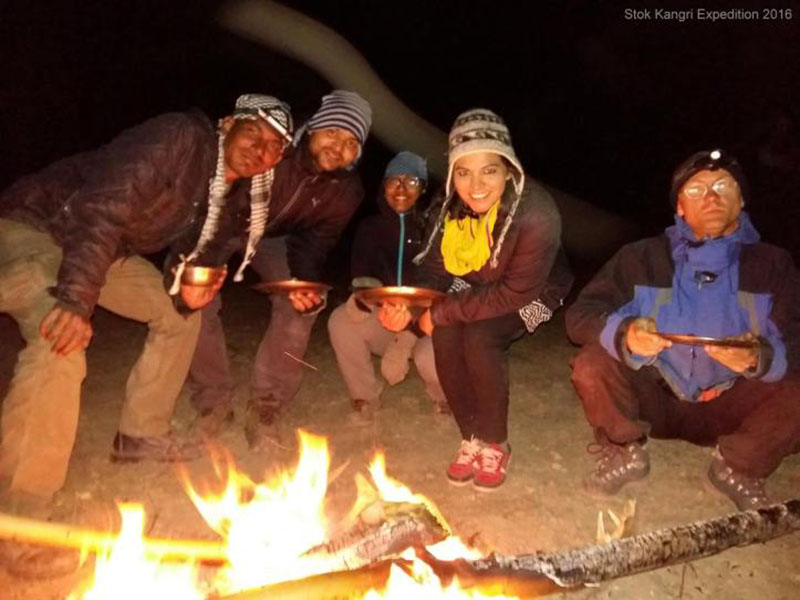 It was a day well spent with lots of lessons, a plethora of thin air, some great jokes & immense satisfaction. There is so much to learn from nature. Each one of us had something to contribute to the other person’s story & somehow, it made it better.

The group was happy to be together on this adventure & pumped up for the challenge ahead. The night sheltered us from above while our hearts ached for more. In the dark colors of the cold Himalayan night, we dozed off only to meet another enthralling day ahead of us.

And the fire lives on.

Please click on the link above to continue reading the next part of this travelogue. Our journey from Leh to Stok Village and to Chang Ma was surely fun. It helped us prepare for what was yet to come the next day; as we moved on from Chang Ma to Manokarma. If you have any questions, please feel free to ask in the comments section below and I will be glad to answer.

A high-altitude trekker with a decade-long relationship with the mountains; Rahul is a product management professional by profession & a nature-lover by obsession. When he's not working, he's out there amidst the stupendous volumes of emotions & feelings that nature offers. What fuels his passion are the idyllic moments that encompass the sound of a mountain, the smell of wet-mud after a downpour, and endless laugh with his loved ones. He intends to scale the highest peaks on this planet with nothing but the grit for moving forward & love for mountains. #mountainsforlife