Vaz Villa – The Misery, The Haunting and The Irony

I once read a line somewhere; that a person’s misery is often the source for someone else’s amusement. It is amazing and quite surprising that how true this one line holds. Think about it, when you hear about an ill-fated incident, do you read or talk it about because you are concerned about the welfare of the person involved; or do you just want to get more details because of just the natural curiosity and amusement. In case of the so called “haunted” places too, I think this one statement clarifies the mystery around 90% of all these sites. One such place that I want to talk about in this post is the Vaz Villa of Bangalore; a place with a tragic past that people in a way just made fun of just because everyone loves a spicy gossip. 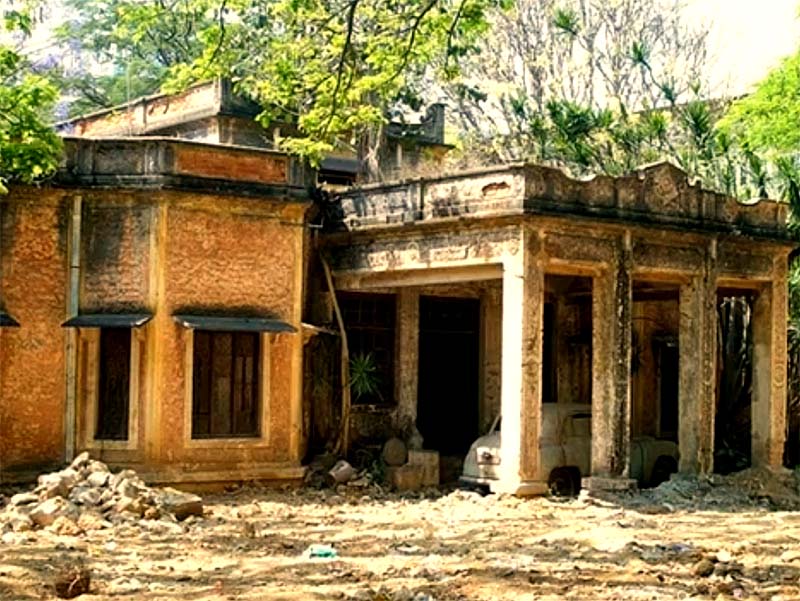 What is Vaz Villa? Quite frankly it is nothing more than a house; like millions of other houses all over the world. There is really no glorified history to it. It stood on busy St. Marks road in Bangalore for a long time before it was finally brought down about 4 years ago. The house no longer exists; its resident is long gone; the spooky stories too will soon be forgotten but a face of humanity that we see in cases like this will forever remain. This 10,000 square feet property was a focus point of tragedy for an old woman; but for others, it was merely a source of endless spooky stories; and a favorite spot for adventure seekers in its last few years.

If one is to believe the stories, this house was built in 1943 by a certain E J Vaz who was a reputable lawyer in Bombay High Court. He gifted the house to his two daughters who remained unmarried all their lives and lived in this house. Until 2002, everything was OK and it was just another house; but after that, this residence of two elderly ladies turned into a weed-infested derelict mansion; and gained a notorious reputation for being one of the most haunted houses; not only just in Bangalore but all over India. As a matter of fact, in its last decade of existence, it became the very symbol of the mysterious, spiritual, unknown and downright fearful.

The ghost stories began floating around in 2002 following a tragic incident that remains unsolved even today. This huge mansion was occupied by Vera Vaz and Dolce Vaz; daughters of E J Vaz. Vera was an English tutor, while Dolce a piano instructor. The two sisters were the only occupants of the house until 2002. On the morning of September 4, 2002, Dolce, the 75-year-old younger sister, was stabbed to death by an unknown person. Vera was an eyewitness to the incident. The case, extensively reported and which shocked the city, is still listed as unsolved. In 2002, HT Sangliana, the police commissioner, asked Vera, then 80, to shift to a safer location. Vera, who had accused some of her relatives of trying to dispossess her of the property, eventually moved out, some say to Australia. Twelve years later, the mansion too saw its end.

But in these 12 years, from the death of Dolce Vaz to the demolition of the house; one can see how superstitions and lack of empathy can take control of better side of us. It is not really a confirmed report but as per the legend, Dolce Vaz was buried in the compound of the house itself.  After Vera Vaz moved out, the house was left completely unoccupied. Everything that the poor woman owned was left behind after her sister’s murder. Furniture lay strewn around; their old car, a Hillman Minx, still parked in the porch and rusting away; Dolce’s piano still in the drawing room with dust settled on it; torn out windows, doors sagged; overall it was a perfect setting for something that could be tagged as haunted.

No one knows how the stories started or who started them but in years following death of Dolce, Vaz Villa gained much ill-repute. Many considered even standing in front of the crumbling edifice for a second longer than necessary a bad thing. People reported seeing ‘ghostly faces stare out’ of the windows and hearing a piano being played in the house. The so called “paranormal investigators”  and  miscreants made the house their playground; entering here at night and giving fake testimonials the next day that the house was indeed haunted. It did not end here. A number of other bizarre stories started cropping up including talks of witchcraft and devil worship; fueled by supposed sightings of inverted crosses and headless statues inside the house.

The house overall, for as long as it stood alone without a resident; amidst the silent trees, tired and falling apart painted a rather sad picture. This was a house that once was built by a man of repute and fondly gifted to his loving daughters. Little did he know back than that both the house and his daughters were destined to meet such a sad end. But is it just the house that paints this sad picture; or is it also the cruel side of people who does the job equally well.

Where was the amusement in the sad demise of an old woman? Couldn’t it just be left alone without people gossiping about it and giving life to absurd stories like this? What was a tragedy for an elderly woman became a hobby for the self-styled “paranormal  detectives”. We got to ask, is this what are capable of falling down to? An old woman died a gruesome death, something she did not deserve and what did do with it? We made creepy stories out of her death. We stained her memory by making a ghost out of her. A woman who was a piano teacher in her life; never probably hurt anyone was turned in to a sinister being after her death.

Surprisingly, Vas Villa is not the only house that shares this story or fate. Another place in Delhi by the name of Malcha Mahal shares the same story. A brother and sister of Royal blood lived in this house in complete misery and all that the people did was to poke their noses in and call the place as haunted for no reason at all. I have covered the story of Malcha Mahal in another article link of which I have provided below.

Fortunately enough, the Villa has now been demolished. No one knows what happened to Vera Vaz or if she is even alive anymore but the house no longer exists. It was brought by someone and the empty land is now property of someone else. After the new construction comes up, it would be hard to recognize the place where the villa once was. I think it would be for the best. At least the idiotic stories too will die and people will let the soul of Dolce Vaz finally rest.

Absolutely not. It was just some made up stories that people made up either for gossip, fun or out of superstition. In the end, one has got to ask. Isn’t there a better side to all of this; to all of us? Or is making up stories for fun and harassing others is all that is left of humanity anymore. Let me know if you agree or disagree. Feel free to comment here on the post and at our Community Forum.

2) Vera Vaz did NOT move to Australia; tis said that she moved to some school hostel (Turnbridge or so) after her sister’s death and died in hospital from a head injury after a fall, maybe some 10+ years ago. .

You so well express my thoughts too I knew the Vaz’s personally and Vera was my piano teacher.Dulcie was the English teacher.As a 17 year old I remember learning the piano from her.

I just want to go there am also from Bangalore

Too late! It’s been torn down as mentioned.

I see you’re a skeptic when it comes to the paranormal side of life ..I have read a couple of your articles. its nice that you take a more realistic approach towards these locations and some of what you ahve written is actually true.

Its good to see someone who takes the time out to get the truth. However just a heads up. Ghosts, spirits (good & bad) do exist.