The Suicidal Birds Of Jatinga

We are all familiar with a scene that we see in most of the horror movies when birds start to act crazy. All of a sudden there will be a lot of birds flying over a haunted place and then they will either attack our victims in the movie or will start to smash themselves dead with glass windows of a house. What if I was to tell you that there is a place in India where it happens for real? Not just over a house or a particular spot but over an entire village? Not once or twice but every day for three hours for three months in a year? Sounds unbelievable? Believe it.

Jatinga is a small village in the state of Assam, roughly around 330 km south of Guwahati. Zeme Nagas, the inhabitant tribe of the region in the early 1900s were the first ones to have laid foundation of this village but did not stay here for long. When they first discovered the mysterious way the birds dropped dead right in front of their houses night after night, it frightened them so much that they sold their land to Jaintias and left the place in 1905. Jaintias however did not care about it much. For them it was merely delicious food falling down from heaven above, ready to be picked and cooked.

Assam is a beautiful state, known for its rich culture, ethnic groups, languages, dialects, literature, tea plantations, large and old petroleum resources (the first oil reserves of India were discovered in Assam in the late 19th century), silk, wildlife, world Heritage Sites, Sal tree forests and forest products. A land of high rainfall, Assam is endowed with lush greenery which makes a highly scenic region of the country and village of Jatinga is no exception. The village is lush green, surrounded by serene mountains and is bedecked with blue Vanda orchids during the flowering season. But it’s not the natural beauty that puts Jatinga on world map. What made this small village famous is a rare phenomenon that has baffled naturalists and ornithologists for decades now. Every year, at the end of monsoon months [especially in September, October and November] on moonless and foggy dark nights, between 6 p.m. and 9:30 p.m., a flock of birds will start descending from north towards the village, will hit the trees on the way or will come crashing into the houses and drop dead. This phenomenon of ‘avian harakiri’ as the locals call it has eventually earned this village its name of “Suicide point” or “Valley Of Death” for Birds. 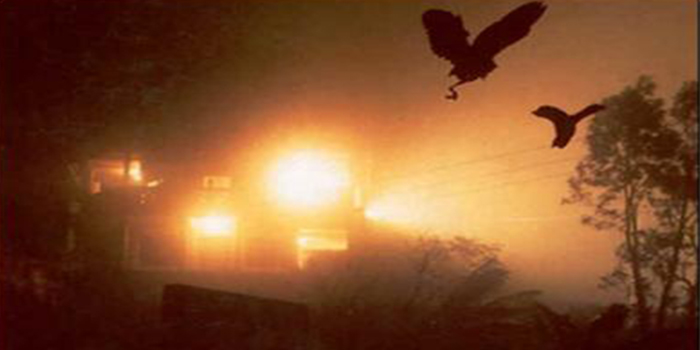 Birds flying down towards village lights in Jatinga

When people of this region first noticed this strange behavior, this place was immediately assumed as cursed. In the early 1900s, three women were burned alive in the village by Zeme Nagas after they were accused of black magic and witch craft. So the first assumption was that it was the spirits of those three witches showering down curses on the village in form of these birds. This freaked out the Nagas and they left the place. Jaintias, the second settlers of the village, however were not bothered with the theory of curses. They instead took it in form of blessing and so it happened that whenever they would see birds flying down, rather than going inside their houses and hiding, they would step out with their Bamboo sticks, start hitting the low flying birds and kill them. When all this was over, they would pick up the dead birds and have a delicious meal before hitting their beds.

Now almost after a century later, the act of killing the bird is still in practice. There are several other legends as well which pretty much summarize the entire episode as Supernatural phenomenon and the deaths of birds as suicides. According to a theory, animals can sense a presence of evil and supernatural. As per some of the villagers, something that can be defined as the very definition of evil is tied to this place but the humans cannot see it. This evil they say is strongest between 6 to 10 PM and when the birds fly over the village during this time, this evil force sucks the life out of them and kills them. Ironically, this entire act of evil does not stop the villagers from still eating these birds.

This however are just the locals talking. After all, the mystery of the birds is what promotes tourism and attracts people to this village. They got to keep it alive. If they openly admitted the fact that they were killing and putting the birds on their dinner table themselves, no one would anymore be interested. Several reputed ornithologists from all over the world have visited Jatinga and studied this strange behavior of the birds. As per them, these Birds get disoriented during foggy nights and get attracted by the bright lights of the village. Because of their disorientation, during the descent they end up hitting several trees due to which some of the birds die, while others are grievously injured, becoming easy prey for the villagers to capture. These birds are often dazed and disheveled, and do not put up any resistance when villagers attack them with catapults or bamboo sticks. As per famed ornithologist late Salim Ali, the reason why these birds act this way is likely to be disorientation at high altitudes and high speed winds due to the widespread fog characteristic at the time. Another naturalist Sudhir Sengupta is of the opinion that weather conditions make changes in the magnetic qualities of the underground water in this area. These changes disturb the physiological rhythm of the local birds and they start behaving abnormally towards the sources of light. In a more recent description of the phenomenon, ornithologist Anwaruddin Choudhury concluded that the birds, mostly juveniles and local migrants, are disturbed by high velocity winds at their roost. When the disturbed birds fly towards lights as refuge they are hit with bamboo poles and killed or injured.

“It is not suicide, to be precise,” said Anwaruddin Choudhury, a well-known ornithologist in Assam. “But the fact remains that birds are attracted by light and fly towards any object with a light source. This phenomenon still puzzles bird specialists.”

As per late Salim Ali, “The most puzzling thing to me about this phenomenon is that so many species of diurnal resident birds should be on the move when, by definition, they should be fast asleep. The problem deserves a deeper scientific study from various angles”

And he is not wrong. 44 species of the birds have been identified to die here and termed as suicidal whereas none of these birds are known to have any suicidal tendencies elsewhere in the world. These include Kingfishers, Black Bitterns, Tiger Bitterns and Pond Herons, and several other birds that have never displayed a suicidal behavior elsewhere. There are several other questions as well. For example, these birds always come from the north and land only on a well-defined 1.5 km long and 200 meters wide strip. Villagers tried to put up lights on southern side of the village, prepared a landing strip but no bird came from the south. Another big question is that why only during those 3 hours? Why only after Monsoon? And as Salim puts up the question, what are these birds doing up so late? At that time, they should be back in their nests. What rattles them so much that they take a flight and run towards the village lights?

Wildlife officials in India have taken steps to prevent wanton killing of birds in Jatinga which as per the official records have brought down the bird death rate by almost 40%. District authorities have even created a festival around the bird suicide called the Jatinga Festival, first edition of which was held in 2010, in order to prevent wanton killing of Birds and promote tourism. Supernatural or scientific, the fact remains that no one has an exact understanding of this strange behavior of birds in the small village of Jatinga.