A Simple act of kindness

In today’s world, where it feels like the term “every man for himself” has come true, kindness is something hard to find. “Nothing is for free”, I was told once as a kid and every day, the moment I step out of my house, the world around makes me realize how true these words are. No one has time anymore for anyone else but themselves. Everyone is running, everyone is rushing. You ask someone for as simple as time and the first thing they would do is give you a scolding look for putting them in the situation where they would now have to do the herculean task of looking at their watches or cellphones. They will then tell you the time in a haste and walk away.

During one of my trips, I was in the small town of Kaza in Spiti valley and our plan was to stay there for a day at least and visit the nearby villages of Kibber and Kaumik. I was told that the area is beautiful, quite scenic and there is a high chance that I may find thousands of years old fossils over there. I was quite excited about it, a fossil is something I had never seen before in my life and that too thousands of years old, that has got to be good. I was however soon to be disappointed because the so called fossils that a local showed me in Kibber were just a few pieces of rocks with some markings on them. It was nothing but just a rock. I had no idea what I was looking at. Quite honestly I had no idea what I was expecting but at least not what was presented in front of me.

Nevertheless, the scenic part was quite true. The place was indeed beautiful. So beautiful that we noticed a small road going towards another village that was not on our agenda to visit but we anyways took the detour because we wanted to see more. And so our day went by and by 3 PM, we were standing in a very small village of Tashigang. A village that was actually nothing more than a few houses put together in middle of nowhere. We stopped in front of a monastery to pay a visit. The monastery however was closed that day as all the monks except one were away visiting the famous Dhankar Monastery. My friend and I were both quite hungry as we had not eaten anything since that morning so we asked the only monk in the monastery if there was any place in the village where we could get something to eat. As expected, the monk shook his head in negative. The answer was No, there was no place in that small village where we could hope to get something to eat. My friend and I just looked each other with slight disappointment as we were both practically starving by then and the monk noticed the disappointment.

“We have a kitchen here at the monastery. I can cook something for you if you would like” He said

This definitely got our hopes up.

“No it’s OK, I really do not want to put you through any trouble. We will eat at Kaza when we get back there” I still tried to be modest.

“It is no trouble at all” The monk replied smiling, “I can cook up some Maggie noodles for you guys, won’t take long”

This sounded like a deal. Cooking Maggie is not really a hassle so I agreed.

“I do not have Maggie here though. I can go to the village and get it for you if you can give me the money”

Monks I knew do not carry money of course and I did not even want him to pay on our behalf even if he did. All that I needed to do was give him Rs. 20 for 2 packets of Maggie noodles but my immediate answer was no. The road that we were on and the monastery were on a hill however the village that he would have to go to buy was down in the valley. There was no way I was going to put him through such trouble.

“Please no” I said, “That village is in the valley down below and I do not want you to climb down and then climb back up the hill for us”

“It is all right” He laughed, “I do this climbing down and back up at least 10 times a day. Not a big deal for me”

I was still hesitant and the monk again reassured me that we were not putting him in any trouble whatsoever. After a few minutes, I took my wallet out and handed him over a Rs. 50 note. I did have change as well but I still gave him that 50.

I did as he asked and he started to walk down the hill towards the village leaving us at the monastery. I could not guess exactly but If I have to, I would say that the village was at least 2 kms downhill and then 2 kms back uphill. From where we were standing, It looked far away indeed. We waited and the monk came back after about 40 minutes and immediately got to the task of cooking. We just sat there in that small kitchen having small talks with him, watching him with gratitude. After 10 mins, we both had 2 bowls of Maggie in our hands that we were gulping down. He was a good cook as well. It was one of the most delicious yet simple meals I had in my life.

My friend waiting in the kitchen of the Monastery. 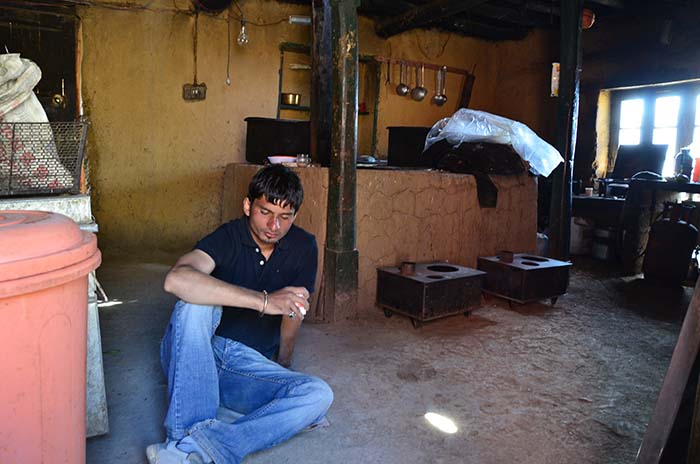 We both thanked him for his hospitality with all our hearts, left the village and came back to Kaza but till date I cannot forget this small incident. I still think of that monk and the fact that how one person can sometimes go through all the hassle for someone else for no selfish reason of his own.

786 – Origin, Meaning and Significance in Islam

These people are very rare .. you are indeed lucky