Top Posts
Spiti Circuit in 2021 – How to Plan...
Stakna Monastery Leh Ladakh – A Complete Travel...
Tso Kar to Leh – Across the More...
Jispa to Leh – Behold the Wonders of...
Narkanda to Delhi – The Journey Back Home
Snowfall in Narkanda – A Pleasant Surprise
Narkanda to Hatu Peak – The Road so...
Delhi to Narkanda – A Journey to Remember
Delhi to Jispa – A Journey to the...
Travelling Solo with a Child – How to...
Haunted Stories

Some people think that religion began as a way for primitive cultures to explain natural phenomenon, the fire, the wind, the rain. They created a god for each one. This was not done out of respect or ignorance but out of fear. They considered everything they could not understand as living, capable of individual thoughts and of hurting them. With these beliefs came the belief of an afterlife. This was probably created because of man’s desires of immortality, trying hard to believe that death is not the end of all, that there is something on the other side, something good waiting for all of us. Some created god as a symbol of hope, for strength, some as an excuse while some believed in him for fear and to blame. Our primal self never accepts responsibility for whatever wrong happens around us, to us and hence an anti-god was created, the devil. But it just did not stop here. After god and the devil, angels and demons came into existence and the entire divine and supernatural phenomenon took shape.

I am not trying to sound like an atheist here but this is one of the theories that I have read about what makes people believe in ghosts. You would think science would have made religion obsolete but it hasn’t. In fact there are places that stand as a symbol of modern times yet people still manage to link them to the concepts of supernatural, and hence going back to our ages old beliefs without any rational thinking. One such place is the Grand Taj Mahal palace hotel in Mumbai. 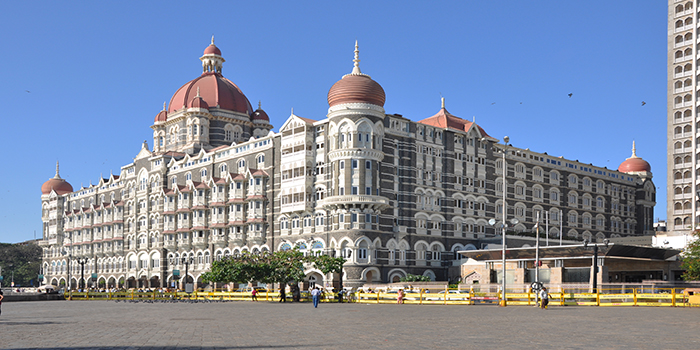 The idea of building this hotel came into existence after Jamshedji Tata was once barred from entering the Watson Hotel that was meant only for whites. He felt so humiliated because of the racist behavior that he decided to build a Hotel for himself and the countrymen, in answer to the insult. Three Indian architects by the names of Siddhesh S., Sitaram Khanderao Vaidya and D. N. Mirza were assigned the task of designing a hotel so grand that it would not have an equal in the entire world. Khanderao Vaidya was the main architect and after his unfortunate demise while the hotel was still under construction, an English engineer, W. A. Chambers took over as the head architect. Finally, the hotel was completed and inaugurated on 16 December 1903, with 7 floors and total cost of construction was £250,000 (£127 million today).

There are no official records to what happened of W.A. Chambers after he finished building the hotel but there is a rumor that he committed suicide right inside the building. There is also a very childish theory behind the reason of his suicide. It is said that he wanted to build the hotel facing in the other direction than it is today. Chambers created the blueprints and went off on a trip to England. When he returned in 1903 he was shocked to find that the hotel frontage had been made in the reverse direction. He was believed to be a perfectionist and seeing the huge error in a construction that he was heading shattered him completely. So much that a few days later he walked over to the fifth floor of the building and jumped to his death from a window.

Now for over a century, he is believed to be a resident ghost of the Taj Mahal hotel. Several of the hotel’s employees and guests have reported sightings of Chamber’s ghost. All these people narrated the incident as Chambers making rounds in the long corridors and making sure that everything was in order, as if safe guarding the very building that he created and loved more than his life. There are also stories of an incident when one of the cleaning staff members was caught stealing from the hotel. He was found unconscious with hotel’s silverware hidden under his clothes. When he came back to his senses, he reported that it was Chamber’s ghost that caught him stealing and knocked unconscious.

Just a single thought of reason would make anyone laugh over these stories. First of all, Chambers was not the original architect of the building, it was Vaidya. Vaidya designed the entire hotel and by the time Chambers took over, it was already half built so there is no way that he wanted to build it any different than it stands today. Chambers job was only to finish the making the building. He did not designed the blue prints and even if he did, how come he just handed over them over to someone else, went to England before the construction and returned after the hotel was completely built? He was the head architect and he left before the construction began and returned after it was completed? Everyone would agree that it does not make any sense at all.

The one question I have is if Chambers loved this hotel so much that he even gave his life for it then where was his ghost when a bunch of terrorists were and destroying the hotel in 2008 attacks? Where was Chamber’s ghost when innocent people were getting murdered right inside the hotel at the hands of some maniacs? Ghosts are after all believed to have possessed, hurt and even kill people for centuries so if Chambers cared enough to knock a stealing employee unconscious, why did he not come to rescue when bombs were going off right inside Hotel Taj?

I am actually Chambers’ great great grandson, his full name was Walter Ashbridge Chambers, born in 1865, and aside from being an architect, also ran for Parliament in 1922 with the Labour Party, but lost. It is also said he had a mistress who blackmailed him out of his wealth. Pretty crazy guy.

Chamber’s Ghost was On Leave that particular day.