The Legend Of Brijraj Bhavan Palace – The Ghost Of Major Burton

Quite often I have found myself wondering, why people believe in ghosts. What makes us believe that there is something out there in the dark, in abandoned places, into the unknown? What makes us assume that there is such an entity, a force that is capable of hurting us, taking control of our bodies, invisible to our eyes and willing to kill us? I am yet to meet a person who seen a ghost in real. Thought a lot of people claim to have encountered Supernatural but how many of them can actually prove it. Yet 90% of the people still believe that ghosts and spirits exist even thought they have never seen one. Why that blind belief? Why that fear?

Or is it just a tale that we heard when we were kids and molded it into something sinister as we grew up. Something that our parents told us as kids to keep us from poking our noses in places where it didn’t belong. A tale that our parents made up trying to get us to sleep at nights, to keep us from mischief.  A tale of a ghost that will hurt us if we did something bad. Maybe that tale just stuck in our heads and grew into a bigger fear as we grew up. Maybe it was just a legend that got passed on from generations to generations, like so many others.

But people believe in ghosts, that is a fact. They always have and they always will. This kind of belief does not need a rational reasoning. For anyone reading this article, ask yourself. Why do you believe in ghost? Have you ever seen one? Most of the people will not really be able to explain about what put this fear in their hearts but still they are afraid of ghosts. Truth is, Proof or no proof, ghosts is what people believe in.

It was the year 1857, the year of first Indian fight for Independence. The year when for the first time Indian kings of several different regions came together to fight a common enemy, the British. Unlike the Freedom movement led by Mahatma Gandhi, the 1857 movement was a complete mutiny, a war. Indians were fighting the British in an open war and lives were lost on both sides. Amidst this war, still untouched by Mutiny was a small town in Rajasthan called Kota.

Like most of the cities in Rajasthan at that time, Kota was under complete control of English. Though there was still an Indian King in the city but he was merely a puppet. The real control of the city and surrounding areas was under the British, who would leave one of their officers in Kota to control the area. As a residence to the officer, they built a Palace here in the year 1830 and named it Brijraj Bhavan Palace. The name Brijraj itself signified the English rule, British Raj and hence the name Brijraj. Though some people believe that it was named Brijraj post independence after the name of King Brijraj. 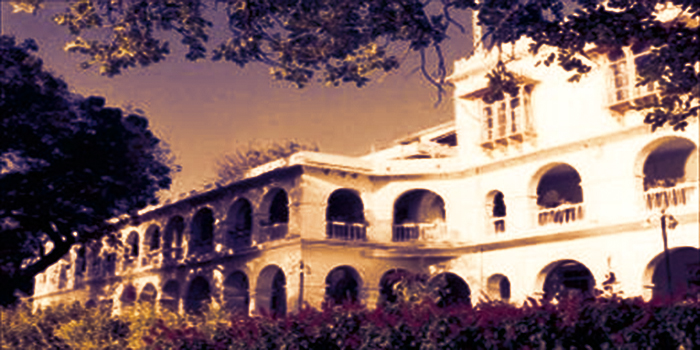 In 1857, this palace was home to a Major Charles Burton of 40th Bengal Native Infantry. He was posted in Kota in the 1844 and had been living here with this family for 13 years. At the outbreak of the mutiny, Major Burton was asked by the British to travel to Neemuch, a small town in Madhya Pradesh and handle the mutiny there. Kota at that time was completely untouched by war and thinking that there wouldn’t be a problem here, Major Burton with his family travelled to Neemuch. In December of the same year though, he received a word from the Maharaja of Kota, warning him of a possible mutiny in the city. The letter had urged Major Burton to come back to Kota immediately and handle the situation. British were already fighting the Indian army in several states and could not afford an outbreak in Kota as well so in order to suppress the mutiny before it even started, Major Burton immediately started for Kota. Little did he know that he was walking straight into a trap.

Burton with his family arrived in Kota on December 13th, 1857. Two days later, on the night of 15th December, he was informed by the guard that there was a huge crowd approaching the palace. Assuming that the crowd must be the locals coming to the palace for some help or to discuss an issue, Major Burton stepped out to talk but immediately got fired upon. Sensing the trouble, he rushed back in, took his two sons with him and hid in the upper room hoping that the guards would hold back the crowd long enough for help to arrive. Against all his hopes though, he and both his sons were soon captured by the Indian army, dragged to the central hall and shot dead kneeling down.

After the mutiny was suppressed, Kota was again back under the control of Britishers and Brijraj Bhavan palace started to again serve its purpose of British residence. Many people including Viceroys, Kings and Queens and Prime Ministers have resided here. In 1903, Lord Curzon visited the palace, and in 1911, Queen Mary of England stayed here on her visit. After independence, the mansion became the private property of Maharaja of Kota but was taken over by Indian Government in 1980 and declared as a heritage hotel. It is believed though however that no matter who came and went this palace always remained the residence of Major Burton who never quite left even after his death.

Most of the tales related to such ancient places are of ghosts who would hurt people and even kill. Major Burton’s ghost however has always been considered as a friendly one. If one is to believe the local tales, in his life, Major Burton was a typical army man of total discipline. During his residence, there was a complete army lifestyle at the palace and everything was systematic and in an order. He did not even give an exception to his own family when it came to discipline. It is believed that even after his death, he remained an army person at heart. The haunting related to Brijraj palace are sightings of Major Burton still roaming around with a cane in his hand and making sure that everything is in order. Guards who were posted here at night talk about how they heard his voice warning them to stay alert. A few guards who nodded off mention getting slapped by an invisible force, waking them right up. Even the former Maharani of Kota once told British Journalists in 1980 that she had seen Major Burton several times, in the same hall where he was killed.

Like all other so called haunted palaces, there is no recorded proof of a supernatural existence at the palace. It is still being used as a heritage hotel and no guest was ever harmed, or slapped for that matter, by the so called ghost of Major Burton. Per the legend, Major Burton was indeed a very good man and has remained so even in death. So the big question here is, why would he stay here? If there is an afterlife, then he should have gone to heaven to enjoy a better place. If he was an evil person, then he should be burning in hell, how did he manage to still stay here and escape getting judged and punished in hell? And if it is at all possible for spirits to stay back in this world, what is the point of heaven and hell anyways?

Or did the stories just start because some guard wanted to gossip with his friends about how he saw a ghost while on night-duty? One can wonder.

Those people who stay in haunted places for 7 or 15 days they experience it in 24 hour stay one cannot experience it. I know I encountered spirit two times. I. Healer I can easily feel sensitivity of area.

Definitely heart touching and truly satisfying blog.That was the end of my investigation on this topic
But I didn’t that of no one is being haunted here or feel something like that so what’s the purpose of considering this place under this category??

I myself have visited here lots(4-5) of times here but never feel a needle of paranormal feeling.
But I am damn sure after hearing all this rumours I will be haunted next time
(P.J)

Do let me know if you sense something Pritesh Bhai 🙂

This place is so frightening in India. Last year, I visited to this place with my family. I wouldn’t forget that memory.

Really? I didn’t find it frightening at all.

What did you experience ther MR.JHON??