The Haunted Dumas Beach of Gujarat

Ancient places and abandoned houses have been long associated with ghost stories and paranormal activities but sometimes the legend or rumor spreads way beyond that which is the case of the Dumas Beach near Surat, Gujarat. Years ago when I first stepped on this beach, I had no idea about the stories related to it. I was not even aware of the cremation ground here and neither were any of my friends. We spent the entire evening at the beach and stayed there till late. We were possibly the last ones to leave the beach that evening and it was almost midnight by the time we sat in our car to drive home. Years later when I learnt that Dumas Beach is considered among the most haunted places in India, my immediate thoughts were of that evening we spent there, a group of three guys sitting all alone in the sand at midnight with absolutely no one in sight. I went through the events of that evening in my head carefully, trying to think of anything that we may have seen pointing towards a possible haunting but obviously I could not think of any. We had a nice time at the beach and came back home after midnight. 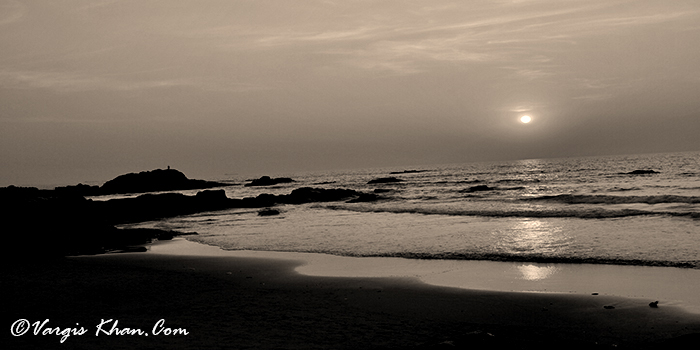 We humans have a tendency to either fear what we cannot understand or to blame others for our sufferings. All our lives are spent trying to blame other people for whatever wrong happened to us but we rarely accept the fact that it maybe because of our own fault. If we cannot find a human to blame, in the end we put it all on god and destiny. We try to take comfort in the very fact that nothing is truly in our control and we are merely puppets with our strings in god’s hands. Somewhere in this theory lies the reason why for centuries people have continued to believe in ghosts and evil spirits even though there is not even a single recorded incident that can support these beliefs. Perhaps it is just a hope of life after death that makes us believe in supernatural. The “ever-lasting soul” part of our lives that we so badly want to understand but have no knowledge beyond what our religions told us is perhaps what compels us to believe that the mortal death is not final.

Beaches are beautiful places. There is nothing like sitting on a beach alone on a late evening or early morning and watch the sun set or rise at the horizon. However there is also the fact that almost every beach has cases of deaths due to drowning. Careless people walking too far in the water and getting pulled in by the waves. In Goa there have been so many deaths that the government has prohibited for everyone to stay at the shore after sunset. Same is the case with Dumas Beach. Over decades, there were several incidents of people drowning and their bodies washing up at the shore. However unlike other beaches, deaths here are immediately blamed on ghosts that lure people into the water and the sole reason behind that is because this beach also has a Hindu cremation ground.

For every place associated with hauntings, it’s usually the locals that will tell you tall tales about how they have for long seen what cannot really be explained as natural. How they have heard strange noises and seen things that could not possible be human. You will hear instances of people dying but there is never a written record of any such death. Then these tales get fueled by people eager to tell a story of how they have seen a ghost when most of the people have not. That feeling of someone listening to you intently with their eyes wide open and jaws dropped is enough to inspire anyone to come up with a story of how they encountered something supernatural and barely made it away with their lives.

If you are to visit Dumas Beach, there is nothing about this place that will suggest it being haunted. It’s just a normal beach that is filled with people at evening and kids playing around. However, if you are to believe the locals, people walking around at the beach at night have often complained about hearing strange noises telling them not to go towards the water and turn back. Some people will tell you about having seen a strange white figure rising out of the water. There are rumors that some people were lured into the water by this white apparition. Most interesting part however is the one related to the dogs. People complain is that all the dogs that live in the vicinity of this beach bark and howl all night. People talk about how their dogs have tried to stop them from continuing further when they were taking a stroll at the beach late in the evening. And then there are also talks of missing tourists who have walked this stretch of black sand at night have disappeared. Yes, I said black sand. Interesting part about this beach is that the sand here is slightly black in color which is of course considered to be so due to the supernatural presence. It is said that due to the evil spirits walking here, even the color of the sand has turned black.

Let’s take a look at some of the known facts. Black sand at beaches is not something that is rare. There are places all over the world that are predominantly made of black sand because it consists of Lava. Even other color beaches (e.g. gold and white) can often have deposits of black sand. Large waves can sort out sand grains leaving deposits of heavy minerals visible on the surface of erosion scarps. Black sand is not something that is particular only to Dumas beach. Anyone who has ever walked on the beach or lived closed to a sea-shore will agree that the wind is always high closer to the coastal areas. Wind travelling at such high speeds produces strange sounds to your ears but it’s nothing supernatural. It’s just wind passing by. People getting drunk at beaches late in the evening is not rare either. Several of these people walk into the water under the influence of alcohol and are never seen again. Their bodies wash up at the shore a few days later and same is the case with Dumas beach. There are documented cases of deaths by drowning but it is not particular to Dumas. People drown and die at beaches all the time and almost everywhere. And since when did dogs barking and howling at night become strange, is a question that we can all ask.

So why the entire ghost stuff about Dumas Beach? The only reason is the cremation ground right next to it. A lot of dead bodies are cremated here and their ashes scattered in the water. Due to this very reason, orthodox and superstitious people started considering this place as either sacred or haunted. They started talking about how some spirits were stuck here, could never leave the place and started hurting other people. Soon these stories spread like fire and a perfectly beautiful beach became notorious as haunted. Anyone who lives in Soorat or closer to this place, please spend an evening at the beach and you will realize that there is nothing to be afraid of here. Just a cool breeze of wind in your hair, that smell of sea water, and peace in sitting alone at the beach at night is all that you will find here, absolutely no ghosts.

Can we bring out debate on the same? Do paranormal creatures really exist?

I’m much confused regarding the stories. i just want to know the truth. Is there something really going wrong due to spirits or is there some illegal crimes going on which is hidden from the public and made stories of such haunt to keep those crimes ongoing? i really need an answer.

The only sure shot way of knowing that is to go and spend a night over there yourself ….

Illegal activities can be one topic for the story. But then we don’t have crimes being committed at Bhangarh, Rajasthan. We have got evidences for supernatural activities ongoing at Bhangarh. Crimes, I think can be a topic for research.

It is better to leave these myths in place as it protects the beach from crowds that will bring nothing good but noise and garbage with them and will guarantee the ruin of this beach and its ecology. Indian public is notorious for lack of respect for keeping public places clean. Ideally, every place of natural beauty in India should become haunted – only way to protect them from these foolish people.

This may sound harsh, but it is the truth. India’s environment is in a bad shape due to its massive population and its lack of respect.

How many people die every year in Dumas

I do not know

A very valid point Utkarsh … Nobody considers Holy Ganga as haunted but Dumas Beach is certainly tagged as one ….

Thank you for bringing up this point ….. It was definitely worth adding in the article but did not cross my mind.

Everybody cant have experience in paranominal activities, ghosts are real but they choose some particular human to make them undertand their existance…… there are many people who have faced it