When is the Best Time to Travel to Ladakh by Road?

When to go? I think this is one of the most prominent questions that gets asked when one plans a trip to Ladakh. While the answer to this questions majorly depends on when exactly can you afford to go; there are a few other factors that get considered as well. When I say afford to go, I do not mean it only in terms of money; but also when you can afford to be away from our regular lives for a week or so. Best time to travel to Ladakh by road will depend on how long your plan is for; is there a budget restriction; and how do you intend on traveling. In this article, I will provide some information that can be of help while finalizing the month when it would be most suitable for you to plan a trip to Ladakh. 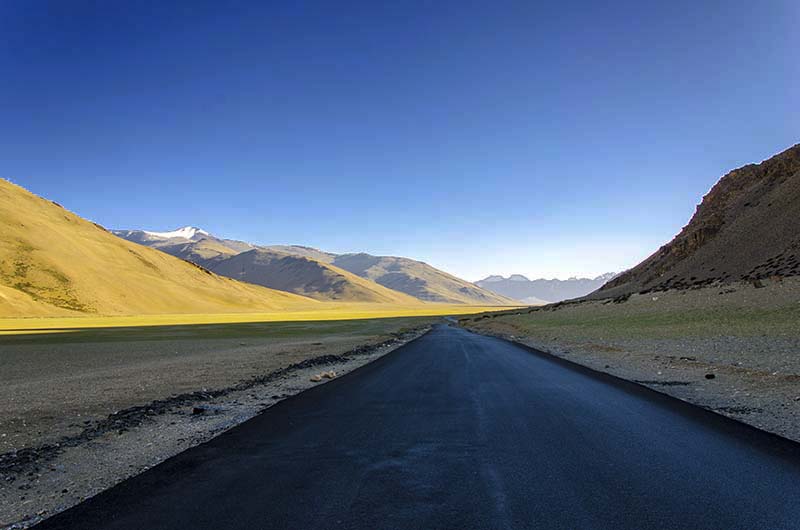 Ladakh as most of us know remains open roughly for a period of 5-6 months by road. The route from Srinagar to Leh opens sometime by late April or early May; while the road from Manali gets declared safe to travel by early June. Until October, the region remains accessible by road and thousands of people reach here every year. Come October and Manali to Leh highway is the first one to close; after it starts to snow at Baralacha La. Srinagar to Leh highway follows closely enough and gets closed by November.

Of these 6 months, best time to travel to Ladakh will depend not only on weather conditions; but also a few other choices that will differ for each individual. The first and foremost will be your itinerary. A journey to Ladakh by road is usually completed in form of a circuit; covering both the roads from Manali and Srinagar. If you too were planning the circuit, then your best time will get limited from June till September; when both the roads are open. Months of May, October or even early November is not really a choice for you.

Also read: How to Plan a Trip to Ladakh

Second factor is of money. Ladakh trip will of course not be easy on pocket. It is hard to give an exact figure but it is safe to assume that a 10 days trip by road can easily cost as much as Rs. 15,000 to Rs. 20,000 per person. Why am I talking money? That is because in off season (early and late months), not all hotels or guest houses are operational. Your choice of accommodation is limited and the hotels that are indeed open will charge you way above their usual price. On the other hand; in peak tourist season (from July till September); entire Ladakh is completely open and your chance of finding a budget accommodation is really high.

Third comes your mode of travel. Public transport in Ladakh is in fact available but the frequency is still very less. HPTDC starts their bus service to Leh by late June and recalls it by mid  September. Several JKSRTC buses within Ladakh too do not become operational until June; and the frequency can get even rare towards September end. So if by public transport, then the best time to travel to Ladakh by road for you would be the months of July and August.

Next in line is the weather and road conditions.  In early months of May and June, roads are mostly broken while BRO works to restore them. Melting snow causes a lot of water streams which can be a challenge to cross sometimes. If you do not have much driving or riding experience; or would rather not take the risk than you must avoid traveling early in the season. Monsoon plays havoc up in the hills and can create a lot of nuisance. If that bothers you than August too is also not an option.

Number of days you have in hand is also a very important factor.  Ladakh is after all a challenging terrain and it is hard to predict mother nature here. I always advise people to keep at least 1 to 2 days as buffer in their itineraries. Roads getting blocked, landslides are not something unusual here in which case you will get stuck and may not comply your timelines. If you cannot afford to do so, then once again early months and August may not be be the best time to go for you.

Best time to Travel to Ladakh by Road

With above being said and taken into consideration; best time to travel to Ladakh by road will probably be the first half of July or the month of September. Roads at this time are not really that bad; Monsoon has either not arrived or have passed; tourist season is at its full peak and accommodation choices are in plenty; and public transport services too are completely operational.

Let me also provide a month to month breakdown of how the region is in a particular month.

Also read: How to Handle Acute Mountain Sickness in Ladakh

May is the month that marks the opening of tourist season in Ladakh. Srinagar Leh highway gets declared by early months and tourists from all over the country start to pour in. There is plenty of snow to see at this time, both on the route from Srinagar to Leh and within Ladakh as well. Hotels and guest houses however do not get all operational by at least until the end of the month. The road from Manali continues to remain closed for most of May so if traveling in this month, you will have to plan to reach via Srinagar and return the same way. Road condtions in this month however will be bad and there is a high chance that BRO may declare a temporary close for restoration work. There will be a lot of water streams along with slush caused by melting snow all around.

The road from Manali to Leh gets open in first few days of June and hence, the entire Ladakh circuit becomes accessible. While the road from Srinagar gets stable in June, Manali Leh highway though still remains dicey. Rohtang and Baralacha can still close due to snow and there remains a high chance that you may get stranded somewhere until the road reopens. If you must travel to Leh in early June, then you should plan it from Srinagar and not Manali. Road conditions on Manali route at this time are probably worse and the entire stretch is full of water streams and slush. In Ladakh however, the tourist season builds up with all hotels, guest houses and tourism related work completely operational.

Also read: How to Plan a  Trip to Ladakh With Children

This is my favorite time to go to Ladakh. Chances of still finding remaining snow at Rohtang and Baralacha are high and if you are traveling in first couple of weeks, risk of getting soaked in the rain is quite low. Road conditions are far better than they were in June and temperature is quite warm. An ideal time to travel.

If greenery is on your mind, then this is the best time to go to Ladakh. Monsoon is at its peek and Rohtang and valleys of Kashmir are lush green at this time of the year. Patches of green amidst the barren wasteland of Nubra, Zanskar and Suru valley is a feast for eyes. The only risk is of rain playing havoc which we all know that it does in hills [remember the cloud burst in Ladakh in August 2010]. Though road conditions are quite good in August, heavy rain can still force authorities to close Rohtang and Baralacha La on Manali Leh highway and Zoji La on Srinagar Leh highway. Several bridges on both these roads can also get damaged. Even the internal roads in Ladakh can get closed due to heavy rain sometimes. Please read: Safety Tips for Traveling to Ladakh in Monsoon

This by far is the best month to go to Ladakh. If photography, adventure and solitude is your preference, this is the  time to go. Temperature starts to drop but road conditions are mostly good. In early September, you will still find plenty of green around. Monsoon will be gone and so will be the risk of landslides caused by it. By late September, as the season starts to end, there will be lesser number of people around. The grass starts to turn orange, yellow, red and amidst the blue sky and snow capped white hills, It is a photographer’s paradise. In 2016; the region received its first snowfall by Mid September which is another plus point. If it snows at any of the high altitude passes; you may even get to catch a live snowfall; or at least see plenty of snow around.

Also read: Clothes of Ladakh Trip – What to Pack

Marks the end of the season. Manali Leh highway can get closed anytime during this month. Temperature is down quite low and the entire region starts to experience snowfall. Neither a preferred nor an advised time to travel to Ladakh by road. If you must however, then do it in first one week to 10 days of October. If traveling towards mid or end October, then only plan from Srinagar side.

I hope the information above regarding best time to travel to Ladakh by road was helpful. If you have any further questions; please feel free to ask in the comments section below; or at our Community Forum; and I will be glad to answer.

Hi Vargis, I will be riding a bike from Manali to Leh during the third week of July. I am planning to start early morning from manali and am wishing to see the baralacha pass covered in snow. can you please let me know the best time in the day i can possibly see it? Early morning or late evening? what are my best chances ? and how would you recommend i plan the stay to see it?

Hi Vargis.. Really good information presented.. I will be leaving from Delhi on 8th Sept in TUV 300 to Manali and take a hault there. I am planning to leave early morning 5-6 AM from Manali and take next hault at Sarchu. Please suggest if this will be fine ?

Thanks Varun. This will be fine but yes, do ensure that you are on your way as early as you can. If this is your first time to Ladakh though and you are not short on time, then I would recommend that you give Manali Leh highway 3 days to enjoy your journey at fullest. If you are unable to give 3 days, then yes the journey can be done in 2 days as well, Manali to Sarchu and Sarchu to Leh.